All about the Ariane 5 space rocket and news 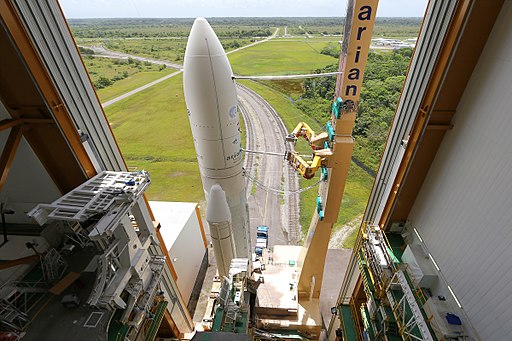 Ariane 5, one of the most emblematic launchers on the planet will pass the milestone of its hundredth flight. Ariane 5 will fly from the Kourou base shortly before midnight. Once again, Ariane 5 will demonstrate its great specialty, the double launch. The space rocket embarks under its headdress two telecommunications satellites to the geostationary orbit. This is the sixth launch of the year for Arianespace. The flight is a little late due to a flight failure in January. If today’s mission is a success, it will bring the success rate of Ariane 5 to 98.1% after 22 years of service.

A few weeks ago, the launch of an Ariane 5 rocket had encountered problems, with a loss of telemetry and an erroneous orbiting. An investigation had been opened to understand what had really happened. On February 23, Arianespace reported that the source of the mistake was identified and that actions were being deployed to ensure that this did not happen again. The mistake was human : it was bad flight parameters that led the rocket to follow a 90 ° azimuth instead of the 70 ° that the rocket should have followed. To prevent the error from happening again, Arianespace will have to reinforce its controls, starting with those of the next scheduled flight in March. As Ariane 5 will soon be retired, it will not be possible to break the record of 82 uneventful flights that ended with the problem of January 25th.

Ariane 5 deviates 20 degrees during a launch

After a series of 80 launches without problems, Ariane 5 had a problem. The results of the survey conducted by an inspector general of the European Space Agency are still awaited. Launcher deflected 20 degrees from its originally planned trajectory. This explains the loss of telemetry. The antennas simply did not watch in the right place. It remains to find the responsible for this error of trajectory. This could be from the flight program or from the launcher’s inertial units, which raises an important question for the investigation : is it a human error or a hardware failure ? Whatever the answer, it may be necessary to review some procedures to prevent this from happening again.

In the end, this had a small impact on the payload of the rocket. Both satellites were put into orbit. One of the two customers announced that the satellite has already started to reach its originally planned orbit. Thanks to its ultra-efficient electric propulsion, the incident should have a fairly low impact on its life. In principle, there will be no impact on future launches of Ariane 5.

An Ariane rocket was fired from Kourou six weeks late due to social movements in French Guiana. The rocket took with it a pair of satellites manufactured in France on behalf of customers in Brazil and South Korea. The flight was declared a success, with both satellites delivered in their respective orbits.

This is the second launch of the year for Arianespace and the 78th consecutive success of the Ariane 5 launcher, which confirms the very good command of the Europeans in terms of putting commercial satellites into orbit. Being able to place two satellites of several tons each in geostationary orbit as was the case last May 4 is one of the unique skills that explains the commercial success of Ariane 5.

Visual of Ariane 5b by DLR German Aerospace Center [CC BY 2.0 (https://creativecommons.org/licenses/by/2.0)], via Wikimedia Commons