All about the Boeing CST-100 Starliner spacecraft and news 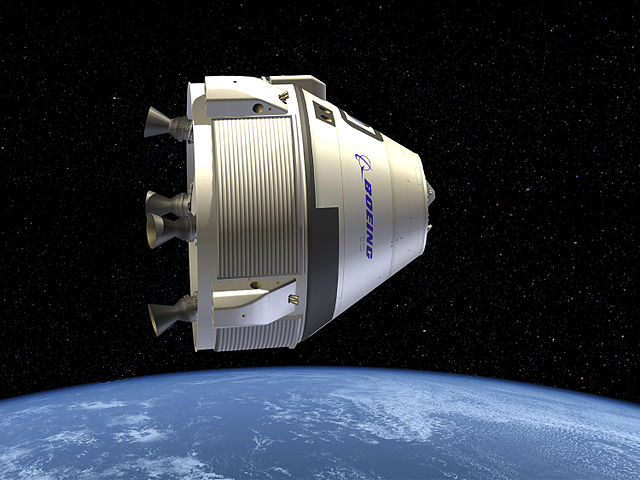 Boeing CST-100 Starliner : an old design outside, a concentrate of technologies inside

The first flight of the CST-100 Starliner spacecraft is scheduled to take place shortly after SpaceX. In its design, the CST-100 Starliner is a spacecraft quite similar to the SpaceX Crew Dragon, with an Apollo-style capsule, propulsion escape engines, and a long battery life. Boeing’s spacecraft stands out in a few respects. For example, it was designed to land on the ground. In addition to these parachutes, it has an airbag system to cushion the impact with the ground. When you look at the animations of the Boeing CST-100 Starliner, one wonders where its energy comes from. The solar panels of the spacecraft are located under the service module, between the RS-88 escape engines. This surface is enough to provide up to 3000 watts of electrical power, which is more than enough for a travel to the International Space Station.

The shape of the capsule strongly reminds that of Apollo. The silhouette of the Boeing CST-100 Starliner is less tall and stockier than SpaceX’s space capsule. Despite this, the CST-100 Starliner builds on all the technology available today : new materials, seamless construction and advanced automation have been incorporated into the design. Boeing’s spacecraft should also be partially reusable. However, the arrangement of its motors on the service module means that they can not be recovered.

Three astronauts will board the Boeing Starliner capsule in 2019

A malfunction in one of the CST-100 Starliner’s breakaway engine tests will delay Boeing’s schedule. The unmanned test of the Boeing space capsule will not take place until the end of 2018 or the beginning of 2019. After that, it will be necessary to wait until the middle of the year 2019 to test the manned space flight. The good news is that we could have expected even more delay, the calendar remains correct.

For the first manned flight of Boeing’s spaceship, three people will form the crew : two experienced pilots who flew on the space shuttle, Christopher Ferguson and Eric Boe, and Nicole Mann who will make his first space flight. Boeing’s CST-100 Starliner space capsule will carry four astronauts to the International Space Station. The Boeing Starliner capsule will be a bit bigger than SpaceX’s Crew Dragon capsule. It can be fixed at the top of different launchers.

With the stop of the space shuttle program, the United States of America have lost an independent access to space for its astronauts since 2011. The access to space now rests on the Soyuz spacecraft and its Chinese derivative, a design dating back to the 1960s. Washington would like to remedy the situation quickly. NASA launched the Commercial Orbital Transportation Services (COTS) program in 2006. The objective of this program is to entrust private companies with the work of access to the space orbit for cargo and for astronauts.

In terms of cargo, the COTS program is doing very well. The SpaceX Dragon spacecraft and Northrop Grumman spacecraft have been serving the International Space Station (ISS) since 2012. For the inhabited program, however, we are still waiting. Both companies are still competing to develop manned spacecraft. Boeing with its CST-100 Starliner (Crew Space Transportation) and SpaceX with its Crew Dragon signed contracts to bring crews to the ISS, six flights each between 2019 and 2024.

But by 2019 we still have not seen a demonstration flight, neither from SpaceX nor from Boeing’s CST-100 Starliner. The situation is already worrying for NASA but it is likely to become even more so. During a test, Boeing said it recorded an anomaly on an escape engine from its space capsule. These are the engines that are fired in case of malfunction of the launcher. It works for a short period of time to quickly remove the space capsule from its rocket. It is a safety measure necessary to preserve the life of astronauts. The Boeing CST-100 Starliner is equipped with four of these engines.

During the test, everything went almost perfectly : the engine ran for the right time and delivered the desired power. It was at its stop that things got complicated because one of the engine valves would not have closed properly, thus causing fuel leaks. Boeing thinks it has found the cause of the malfunction and is now working to solve the problem.

This incident is very likely to have an impact on a schedule that is already badly handled. The official schedule is that Boeing and SpaceX will both proceed to an unmanned test flight next month, and a crew test flight will be held in November for Boeing and in December for SpaceX. A government report released just before the incident, however, predicts that one should not wait for a first manned flight before the end of 2019, or even the beginning of 2020. This new incident could drag Boeing’s proposal even further, which poses many problems. The partnership between NASA and Roscosmos lasts until the end of 2019. After, the US space agency no longer has reserved seats on Soyuz spacecraft. In other words, it will be necessary to set up a plan in emergency under penalty of completely losing the ability to access space for crews. The scenario that American astronauts will still go to space in Russian spaceships at the beginning of the next decade becomes more and more credible.

It also raises the question of the future of unmanned spaceships by SpaceX and Boeing. These spacecrafts were designed to dock at the International Space Station, but the Trump administration wants NASA to disengage from this space station in 7 or 8 years. What about these spaceships that cost billions of dollars and almost ten years of development ? We can at least hope that the engine anomaly of the Boeing CST-100 Starliner is indeed easily correctable, otherwise it may be complicated for the United States of America.