All about the Cassini-Huygens space mission and news 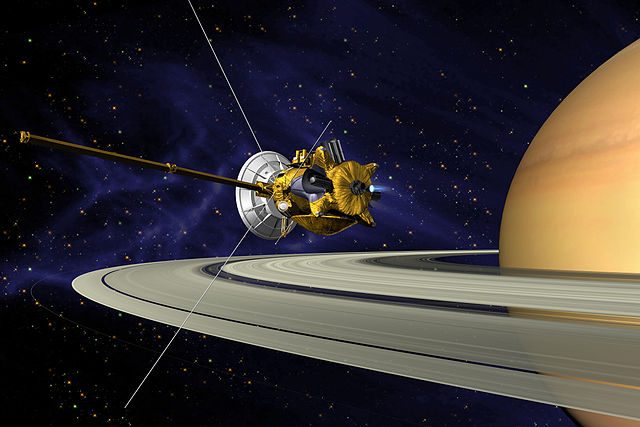 After 14 years of studying the Saturnian system, the Cassini space probe has just completed a vertiginous dive into the atmosphere of the gas giant. Cassini has achieved one of the most ambitious and successful missions in the history of space exploration. The Cassini-Huygens mission was launched in October 1997 through a collaboration between NASA and ESA. The mission was based on a space probe called Cassini and a lander called Huygens, for the Titan satellite. Cassini was able to orbit around Saturn from 2004, after a journey of almost seven years.

The Saturnian system and its many satellites were then relatively poorly known. The planet had been flown over by the Pioneer mission and the Voyager 1 and 2 space probes. Cassini was the first space probe to orbit the gas giant. The discoveries of the space probe revolutionized our understanding of the Saturnian system. The year after its arrival, the Huygens lander designed by the European Space Agency broke away from the spacecraft and landed on the surface of Titan, Saturn’s largest satellite. It was possible to discover this incredible satellite that looks like a primitive Earth with its dense atmosphere, its seasons and its liquid cycle based on methane. But Titan is not the only satellite that surprised scientists. One of the biggest discoveries of the Cassini spacecraft is the Enceladus moon. Enceladus was thought to be nothing but a ball of ice. Cassini revealed the presence of geysers, a sign that the little moon is home to a liquid ocean under a thick layer of ice. Titan and Enceladus are now privileged targets for the search for extraterrestrial life.

The mission of the Cassini space probe has been incredibly long. It has been extended twice in relation to the mission originally planned, thanks in particular to the excellent resistance of the space probe and its large reserves of propellant. It was decided to destroy the space probe by returning it to the atmosphere of Saturn on September 15th. This destruction was wanted for two reasons : first to prevent the space probe from crashing on Enceladus and Titan because it could contaminate them with terrestrial organisms. This end of the mission was also an opportunity to take risks by passing the space probe inside one of the rings of Saturn, which allowed to specify its mass. Cassini has entered the atmosphere of the gas giant at a speed of 31 kilometers per second. Despite the use of its last fuel reserves to try to stabilize it, it was quickly disintegrated by friction of the saturnine atmosphere.

NASA is studying several mission proposals for the launch of a new spacecraft to the Saturnian system in 2025. These missions focus mainly on Titan and Enceladus given the huge discovery potential of these two moons.