All about dark matter and news 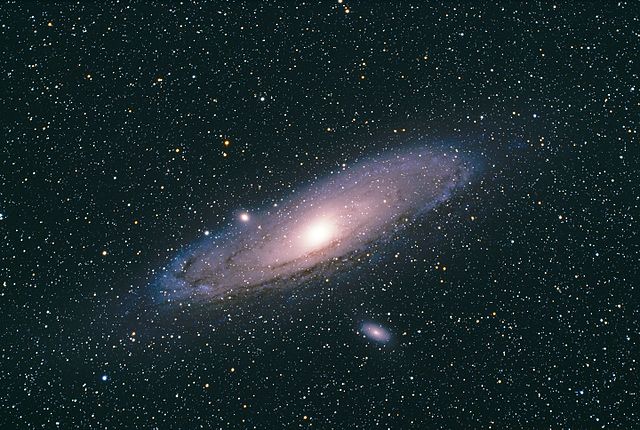 Dark matter has been conceptualized to answer a paradox between theory and observations. Galaxies do not behave just as they should. Some of them move as if they were ten times more massive than they appear to us. The missing material seems to emit no light, radio waves, gamma rays or other radiation, on all frequencies of the electromagnetic spectrum. Assumptions about the nature of this dark matter are numerous, but for the moment we lack experimental verification.

A galaxy called NGC 1052 DF2 is about 65 million light-years away from the solar system. It has been observed, and the results have just been published in the journal Nature. NGC 1052 DF2 is an ultra-diffuse galaxy, that is, a large galaxy with relatively few stars. These galaxies could be particularly rich in dark matter, which could constitute up to 98% of their mass. This dark matter would keep these galaxies in the same gravitational set, without them being torn apart by the neighboring galaxies seemingly more dense. Where NGC 1052 DF2 is a problem is that it seems to be almost entirely devoid of dark matter. The movements of the surrounding globular clusters stick perfectly to the mass deduced from the brightness of NGC 1052 DF2. This curiosity of the universe could actually be a blessing because it will help to eliminate different models of dark matter.

Some of them do not allow structures such as NGC 1052 DF2 to exist. NGC 1052 DF2 also raises questions about galaxy formation and evolution. Current models give dark matter a determining role when creating a galaxy. They are clusters of dark matter that would have formed the first big gravitational structures of the universe, around which the classical matter would have agglomerated. With NGC 1052 DF2, it’s a theory that becomes harder to defend. There is at least some evidence that dark matter and the galactic structures are not always related. No current model can explain the creation of this ultra-diffuse galaxy. Some assumptions implicate a giant galaxy close to NGC 1052 DF2 that could have fragmented to give birth to it, but even with this hypothesis impossible to explain all the characteristics of NGC 1052 DF2.

Images of 23 ultra-diffuse galaxies taken by the Hubble space telescope are being analyzed. Three of these galaxies may have similarities to NGC 1052 DF2. If the discovery is confirmed, with these new observations of galaxies without dark matter it will be necessary to think of reviewing theories on how this mysterious dark matter interacts with galactic structures.