All about NASA’s DART mission and news 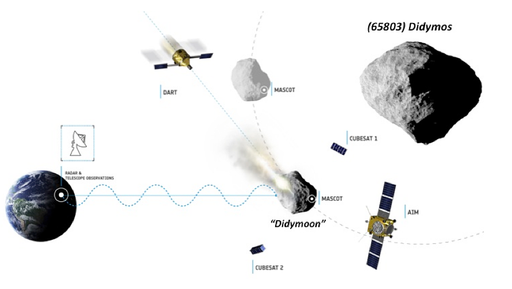 HERA mission to inspect results of DART mission in 2026

The Hayabusa mission and the OSIRIS-REx mission continue to explore Ryugu and Bennu, sometimes presented as dangerous for the Earth. The risk that one of these two objects collides with our planet is actually very small, but one day or another a massive asteroid will be in the path of Earth, maybe in 20 years or in 20 million years.

That is why NASA and other space agencies have a global defense policy. This consists of identifying the objects likely to cross the Earth’s orbit and the evaluation of their level of threat. We try to detect concrete threats in time to try to act. We can imagine several methods to deflect an asteroid.

The vast majority of these methods are science fiction. NASA and ESA want to try a small scale asteroid deflection method. In the early 2020s, the US space agency will launch the DART mission. It is a special space probe because it will not embark almost any scientific instrument. Its role is to crash itself at over 20000 km/h on the small asteroid, a binary system.

We hope it’s the target, named Didymoon, will be perceptibly deviated by this impact. This would be a sign that the method is valid for planetary defense applications. Of course, the mission will be destructive for the DART space probe. At first, we can observe the result thanks to terrestrial observatories.

To learn more, ESA plans a second mission to Didymoon and its companion Didymos. The mission is named HERA. ESA has stated that HERA will be a follow-up mission to be launched in 2023. The goal is to arrive at Didymoon in 2026. The main objective is of course to evaluate the impact of the US probe closely : did the composition of the asteroid help absorb some of the shock ? What are the exact new orbital parameters of Didymoon ?

In addition to taking an interest in the impact zone, HERA will do a detailed exploration of the binary system. It will be the first time that a double asteroid will be explored by a space probe. Didymoon will become the smallest asteroid to have been explored. The target of DART only sizes 160 meters in diameter.

HERA will also embark two Cubesats. The first will have to make a spectral analysis of the two asteroids of the system. This may be an opportunity to discover the difference between Didymos and Didymoon. It will land on one of the two asteroids to take more detailed measurements. The other Cubesat will orbit around Didymoon to probe its composition on radar. HERA should be launched with an Ariane 6. This is the perfect opportunity to guarantee Arianegroup an institutional mission.

ESA to be (possibly) partner of DART space mission

The Earth is relatively spared by meteorites thanks to its atmosphere. But the Earth will sooner or later be struck again by a large meteor. NASA has been conducting surveillance of near-Earth asteroids since the early 1990s. NASA hopes to detect them in time to be able to act and avoid a disaster. But what will it do when NASA detects a really dangerous asteroid?

The mission of the DART (Double Asteroid Redirection Test) of the US space agency is to hit an asteroid with an impactor and measure if it allows to change its orbit. The method could then be used on a larger scale in the event of real danger. To make its demonstration, DART will go in the direction of an asteroid named Didymos. Another asteroid, Didymoon, orbits around Didymos. It is Didymoon who will receive the impact of DART. With only 170 meters wingspan, Didymoon is indeed small enough that we can hope to measure the results. Didymos, for its part, will be able to provide a reference point for accurately measuring orbital changes.

Originally, ESA was to participate in the project by providing a post-impact observation mission, called AIM (Asteroid Impact Mission). AIM would have measured the effects of the impact with great precision. Unfortunately, this mission was unable to find adequate funding. It would seem, however, that ESA has decided to resume this mission : the European Space Agency has just presented a new space probe called AIDA, which would take over the role of the AIM mission. AIDA would arrive near Didymos in 2026, four years after the impact of DART. This would allow the space probe to observe the orbit, rotation and crater left by the DART space probe. By comparing the observations of the two space probes before and after the impact, the effects of the impactor can be determined with great precision.

For the AIDA project to be funded, ESA will have to be more convincing than at the time of AIM. In the face of European decision-makers, the European Space Agency will present AIDA as a global protection mission, not a scientific mission. If the ESA fails to validate the mission, it will be sufficient to observe from terrestrial telescopes inevitably less accurate. However, we may be able to see the impact itself : NASA is working on a partnership with the Italian Space Agency to add a CubeSat to the DART mission. The CubeSat would separate at the last moment from the US space probe and would be very well placed to observe the collision and take impressive shots.

It is to be hoped that the next asteroid dangerous for humanity will arrive in a long time because humanity is not yet ready. To cope with the asteroid, we can imagine that in a few decades we will have the technologies and launchers needed to react to an asteroid that targets the Earth. The most important thing at the moment is to list and monitor all objects that may one day be risky. The commissioning of the Large Synoptic Survey Telescope (LSST) in Chile, scheduled for 2022, is expected to identify more than 90% of the near-Earth asteroid population.

NASA agreed to launch the development of the DART mission (Double Asteroids Redirection Test). This mission is to send a spatial probe to hit an asteroid to deflect its trajectory. This is a test to determine our current ability to respond to the threat of a near-Earth asteroid.

The twin system of Didymos asteroids was chosen as the target, since it will pass close to the Earth in 2022 and 2024. Didymos is actually made of two asteroids : Didymos A has a diameter of 780 meters and orbits around the first, Didymos B, which will be impacted by the mission. The space probe will be of a rather simple design : it will weigh 500 kilos and will impact huge bays at a speed of 6 km per second.

To fight the threat of near-Earth asteroids, NASA established in 2016 a coordination office of planetary defenses. It is responsible for listing and analyzing the trajectories of all objects that could be a threat to our planet.