ExoMars : tests of the parachutes are still not OK 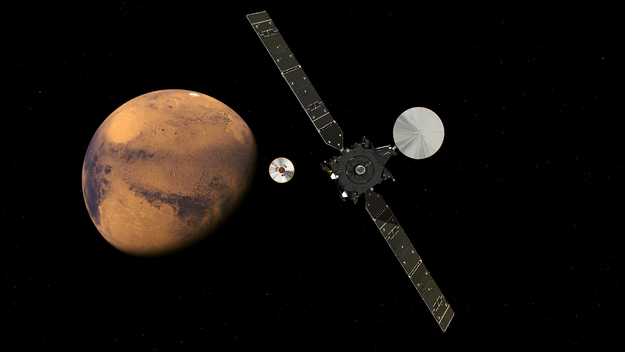 The ExoMars program rover, Rosalind Franklin, will take off in 2020 on the same launch window as the Chinese mission Chang’e 5. A year before departure, the mission led by ESA and Roscosmos still faces problems with parachutes. Two tests conducted in May and August 2019 showed that ExoMars’ parachutes are not functioning properly.

These problems are due to the extraction system. To find a solution, ESA is working closely with NASA, which has a lot of experience in landing on the planet Mars. A new test will be conducted in the USA during the first quarter of 2020. If this test is inconclusive, Rosalind Franklyn may have to wait until 2022.

ESA’s ExoMars Trace Gas Orbiter satellite arrived in orbit of the planet Mars at the end of 2016. However, the satellite reached its final orbit only a few weeks ago. This is due to a long phase of aero-braking that allowed the orbiter of the European Space Agency to maneuver by consuming almost no fuel. Aero-braking is an astronautic technique that has been used in interplanetary travel since the early 1990s. This maneuver involves passing through the upper layers of an atmosphere by a spacecraft. This makes possible to brake the spacecraft and thus to modify its orbit. For ExoMars TGO, it took eleven months. The European spacecraft then used its boosters to stabilize in a circular orbit to the Mars planet. In this orbit, ExoMars Trace Gas Orbiter can finally make its instruments work optimally. ESA has released a striking first picture of the camera from the final orbit.

The orbit of ExoMars TGO allows it to take pictures early in the morning or late at night, and therefore to observe the Martian sites with very different lights. In addition to the aesthetic interest of these images, it helps to better understand the daily processes on the red planet. The camera can also take relief images. This interests ExoMars Trace Gas Orbiter’s four instruments to analyse its atmosphere and how it is composed. The presence of methane in particular could signal a chemical or biological activity in the depths of Mars. But we must already identify the geographical sources of this methane and its temporal variations. ExoMars TGO should also try to locate ice reservoirs on the surface of Mars or in slightly deep. The European satellite should tell us which are the most interesting places to drill.

ExoMars will begin its observations in April

The European space probe ExoMars was launched in March 2016. The ESA orbiter arrived in orbit of the red planet in March 2016, but before starting its work, the probe had to circularize its orbit. It took a year and it will end in March. It took a long time for the space probe to get into its work orbit, because of the technique used, aero-braking. Normally, to circularize an elliptical orbit like that of ExoMars, you have to burn fuel. But fuel is heavy and therefore expensive. The objective of the aero-brake is to brake the probe during its passage at the perigee, but without consuming any fuel. To achieve this, the ESA teams simply immerse the probe in the Martian atmosphere and let the friction brake the probe. For many months, ExoMars has reduced its speed by more than 780 meters per second.

It is now necessary to wait until April for the probe to start its scientific observations. It is mainly the gases present in the Martian atmosphere that interest ExoMars. The presence of methane and its variation over time is for the moment a mystery. In particular, it must be determined whether this methane is derived from an organic or geological process. For this, the space probe will try to detect many gases in the Martian atmosphere. The presence of propane or ethane would be a good indicator of the presence of organic processes. And if the methane is detected in the presence of sulfur dioxide, then it is probably that its presence can be explained by geological processes.

ExoMars will also try to determine the regional and seasonal variations of these gases and many other gases. The probe should also be able to detect hydrogen below the surface of the red planet up to one meter deep, which could indicate the presence of water ice. It’s about locating water ice for future missions. Finally, as Mars Recognition Orbiter, ExoMars is also a relay of telecommunications. It will be used to retransmit the observations of the ExoMars rover to be launched in 2020. The probe will retain this role until 2022 for any device on the surface of Mars.

When the probe arrived in the Martian neighborhood, it embarked a lander that was to allow ESA to test a Martian landing operation. But the lander crashed on the surface of Mars. This is due to a misinterpretation of the radar data that has skewed the use of the parachute and the retro-rockets. Hopefully this will be better for the ExoMars rover which has a much larger scientific payload.