How to see galaxies with a telescope

By observing galaxies, you will explore the history of the universe

The Milky Way is far from being the only galaxy to travel in the cosmos. Hundreds of billions of galaxies drift into space. With a little practice, you will be able to observe some of them from your garden.

Scattered in the cosmic void, innumerable galaxies light the sidereal emptiness of their faint brightness. On a very large scale, these luminous spots form a delicate structure similar to a network of scattered filaments, seperated by huge expanses almost empty. Galaxies send us signals from a distant past. For astronomers, they are not very different from the fossils studied by enthusiastic naturalists.

Every galaxy we see is, according to our perspective of time and space, a snapshot of the history of the universe, and some of them shine in our night sky with the same brilliance as at the beginning of their formation, shortly after the Big Bang. Of course, at such distances, they glow too weakly to be observed by an amateur astronomer, but others are close enough to our Milky Way to be visible to the naked eye. However, it is preferable at first to observe them with astronomy binoculars or with a large-field telescope. Here are some galactic targets for wannabe astronomers.

Which galaxies can be observed with a telescope ?

The Andromeda Galaxy is undoubtedly the most visible galaxy of the night sky. It is also the closest to the Milky Way. Located about 2.5 million light-years away, it takes about 2 million years to reach us. The bulb of M31 is visible with astronomy binoculars and you will be able, with a large telescope, to guess its spiral-shaped structure. With a sufficient aperture, you can see M32 and M110, its two large satellite galaxies. Although smaller than M31, these galaxies are impressive to observe in the eyepiece.

How to find the Andromeda Galaxy ?
Locate the star Mirach (Beta Andromedae) and from there, join Mu Andromedae and continue about the same distance to reach M31.

This deep sky titan is a real monster. Ranked in the category of supergiant galaxies, the M87 elliptical galaxy houses at least a thousand billion stars and a supermassive black hole. This fascinating scientific object is interesting to observe when the Virgo constellation is placed high in the sky. With astronomy binoculars, it looks like a fuzzy star, but a telescope 8 inches or larger can detect much of its periphery and its bright core. Because of the 54 million light-years that separate it from us, the view we have of it is not very different from that of a globular cluster.

How to find the Virgo A Galaxy ?
M87 is located in the Virgo galaxies cluster, halfway between Denebola (Beta Leonis) and Vindemiatrix (Epsilon Virginis). It is slightly closer to Vindemiatrix.

The pair of spiral and irregular galaxies constituted by M81 and M82 is very popular with amateur astronomers. Located about 12 million light-years away from Earth, these galaxies are close enough to be observed in detail with astronomy binoculars and telescopes. M82 is a spiral galaxy that has recently undergone considerable transformations due to the gravitational fight against M81. Both have strong star formation activity, especially M82, which has a very high star formation rate.

How to find the Bode’s Galaxy and the Cigar Galaxy ?
To find this group of galaxies, simply move from Phecda (Gamma Ursae Majoris) to Dubhe (Alpha Ursae Majoris) and then continue on the same distance. M81 is the most visible of the two galaxies, which are separated by only 1 degree.

Located 29 million light-years away in the Virgo constellation, the beautiful spiral galaxy M104 (also known as the Sombrero Galaxy) appears slightly inclined and in profile. The Sombrero Galaxy is famous for its “ring of dust” barring the brilliant core that can be observed with large aperture telescopes. The central bulb, unusually large and dense, hosts a supermassive black hole. It is possible that M104 was previously a giant elliptical galaxy that has eventually shape its beautiful spiral.

How to find the Sombrero Galaxy ?
Like M87, M104 is part of the Virgo galaxies cluster. To locate it, move 3 degrees to the northeast of the Algorab star (Delta Corvi) in the direction of the Porrima star (Gamma Virginis).

Tip : use your peripheral vision to observe galaxies

It may seem paradoxical, but the best way to see a galaxy is actually not to fix it directly. Galaxies are among the most difficult objects to spot in the eyepiece and we must use tricks to have a chance to observe these celestial wonders.

One of these tricks is to accustom our eyes to low light. As our pupils dilate, our eyes can capture more of the incident light. In the same way, our vision of the colors almost goes into standby when a more sensitive monochromatic system is activated. Although this second form of adaptation is very useful, it does not compensate for the problem of the blind spot, an area in the center of each retina where the most photosensitive cells are very scattered.

Does this mean that when you directly fixe a distant galaxy in a telescope, it tends to fade away ? Yes, but with a little practice you will be able to acquire a new faculty, which is called the “averted vision”.

It’s about using your peripheral vision, that is to say to move the image of the object away from the blind spot to distinguish what you are trying to see !

Astronomers say they get the best results by “looking away from their noses” (in other words, if you use the right eye to look at a galaxy in the eyepiece, you will look to the right of the object). To observe an object without fixing it directly requires patience and determination but with perseverance, the use of the averted vision will seem natural to you. You will be surprised to hear your friends tell you that they do not manage to see the galaxy you are looking to show them, although they look at the right place ! 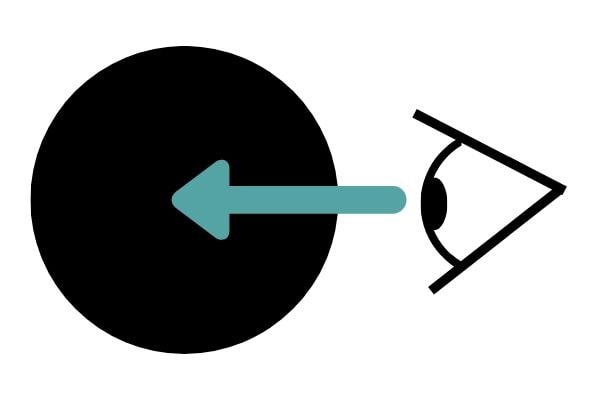 Blind spot
The distant galaxies seem to disappear when you fix them. 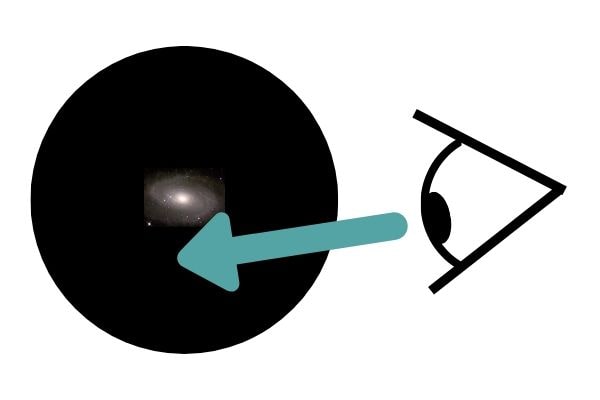 Averted vision
The best way to see faint celestial objects is to look at them slightly to one side.