All about hypervelocity stars (HVS) and news 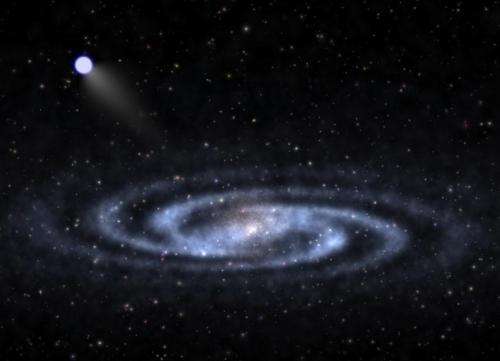 The first hypervelocity star was discovered in 2005. These objects are so fast that their speed exceeds the speed of liberation of the galaxy. They travel at velocities that exceed 500 km per second, which means that on a long enough time scale they will leave the Milky Way forever.

Hypervelocity stars are rare objects. We know a few dozen, so far they all seemed to come from the galactic center. We believe that the supermassive black hole in the center of the Milky Way is responsible for these high-speed ejections. The dominant hypothesis is that hypervelocity stars originally belong to pairs of binary stars that evolve very close to the central black hole of the galaxy. This black hole ends up absorbing one of the stars, catapulting the other at prodigious speeds. The black hole must be extremely massive to eject a star at such a speed. We can think that only Sagittarius A * can be the cause of this incredible acceleration of stars.

But a team of researchers at the University of Michigan has just discovered that a hypervelocity star seems to have been catapulted from the galactic disk and not from the center of the galaxy. The star is known since 2014, its name is LAMOST-HVS1. It is eight times more massive than the sun and four times warmer. It is the closest hypervelocity star to the sun. By combining observation data from the Gaia telescope and Magellan telescopes, the team was able to trace the trajectory of this star. It would have been ejected 33 million years ago from inside the galactic disk. This means that a different explanation must be found to explain the ejection of LAMOST-HVS1.

A group of very massive stars may have given an impressive velocity to LAMOST-HVS1. We have already seen stars being accelerated to 50 or 100 km per second. However, we are still far from 500 km per second, the speed of LAMOST-HVS1. The ​Norma Arm, the area of the galaxy from which this star is derived, is not particularly known for hosting groups of massive stars.

Another hypothesis is that a particularly large intermediate black hole, or even a combination of a black hole and a group of massive stars, would be at the origin of the phenomenon. This hypervelocity star shows that extreme gravitational conditions exist in the galaxy elsewhere than near the central supermassive black hole. But we do not yet know if LAMOST-HVS1 is a singularity or if we could attribute the same origin to other hypervelocity stars.

What is a hypervelocity star?

A hypervelocity star is a star that moves very fast compared to other stars around it, sometimes so fast that it exceeds the speed of release of the galaxy and becomes an intergalactic object. For example, US 708 is a very hot little star that moves away from the center of the Milky Way at a speed of 1200 kilometers per second. The mechanisms that allow these stars to acquire so much speed are not yet well known. These could be old double stars whose companion exploded into a supernova. This is the type of impulse that could generate such phenomena.

Neutron stars could also acquire a very high speed if the supernova that gave birth to them exploded asymmetrically for some of them. The supermassive black hole in the center of our galaxy is probably responsible. In some cases, it could only capture one of the two stars of a double system, the other would be catapulted at prodigious speeds. If a hypervelocity star had a planetary system, then this system would probably cross the galaxy as well.