All about the Kilopower reactor and news 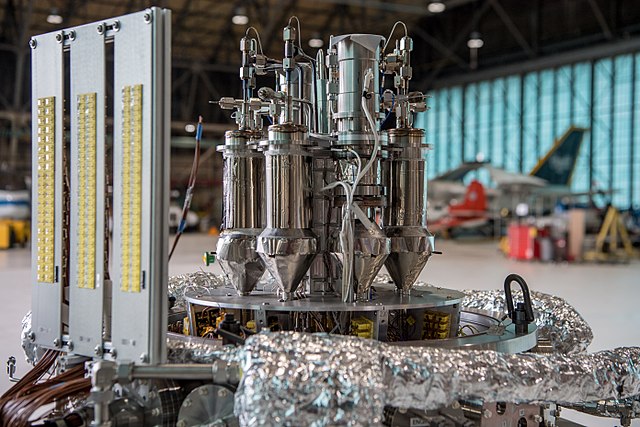 Kilopower has been successfully tested in the Nevada desert

For most space agencies, the future of inhabited flight seems to lie on the moon’s side. The Chinese, Americans and Europeans hope to set foot on our satellite in the medium term, and why not establish a permanent base. On the other hand, we know that SpaceX’s main goal is Mars with similar projects. In any case, the maintenance of a human presence on another celestial body than the Earth generates many challenges, including energy.

The robots that are currently doing space exploration work can rely on two sources of energy : solar energy using photovoltaic panels, or nuclear energy thanks to heat recovered from radioactive materials. For a human presence, these energy sources may be insufficient. Recovering the heat of materials can only produce a few hundred watts and the solar panels only work during the day. As lunar nights last 14 days and human survival systems need a lot of power, alternative solutions are needed.

NASA is currently working on the Kilopower project, a mini nuclear fission reactor. The US Space Agency announced two weeks ago that the reactor prototype has been successfully tested. Kilopower is made up of a small uranium 235 core the size of a roll of paper towel, heat pipes carry the heat of the heart to Stirling engines. The thermal energy of the core is transformed into mechanical energy by the motors and then into electrical energy by generators. The system is very compact and can generate an electric power of 10 kilowatts for 10 years.

A series of tests conducted in the Nevada desert exposed the prototype to extreme conditions, close to conditions on the Moon or Mars. To prove that the reactor can operate reliably while being abused by meteorological elements, the Kilopower test team simulated a real mission with 28 hours of continuous operation, including start-up, climb and maintaining power, then stopping the reactor. In parallel, the engineers simulated failures of the different systems.

Kilopower has passed all these tests successfully. Kilopower could therefore be a realistic solution for generating electricity on Mars or the Moon. NASA estimates that three or four Kilopower reactors will be enough to power a base permanently. But nuclear power in space is a sensitive subject, even with the right technology : putting a block of 235 uranium on top of a rocket represents a real risk of radioactive fallout on Earth if the rocket explodes.

NASA’s Kilopower project is expected to help future explorers, humans and machines. Energy is a fundamental parameter of every space mission. In space, either photovoltaic panels are used or nuclear energy is used. In most cases, the use of nuclear energy takes the form of RTG, thermoelectric generators that operate through the heat of radioactivity. They can only produce a few hundred watts, which is not enough to power a human base.

To increase the capabilities of space missions, nuclear fission must be used. Nuclear fission generates much more power from the same amount of radioactive material. In the past, the United States and especially the USSR have tried to develop nuclear fission but without any real success.

Many reconnaissance satellites have embarked about thirty nuclear reactors in orbit, with sometimes disastrous returns to the atmosphere. To one day be able to carry out more ambitious space missions, a powerful source of energy is necessary. Nuclear fission is one of the only possibilities.

NASA seems determined to advance research very quickly. The US Space Agency is working on a prototype fission reactor for space applications of small size and low power. NASA has indeed validated the financing of the Kilopower project for several years. Kilopower is a mini nuclear fission reactor that should be able to produce 10 kilowatts of power for a period of 10 years, ideal for powering a small inhabited base or even for propulsion applications. With such available power, the applications are numerous : drilling, electrolysis or constructions. These applications are difficult to envisage with a power of a few hundred watts, while with a power of a few thousand watts possible applications are much more interesting.

The Kilopower project began a test campaign in November, including a 28-hour continuous operation test. NASA teams are focused on producing a safe reactor that requires little handling and maintenance. If the risk is accepted by political leaders and public opinion, Kilopower could become the centerpiece of all the most ambitious missions of the next decades.

NASA has released a $ 15 million budget for the development of a micro-nuclear plant. Energy is always a problem in all space missions : to power the instruments of space probes and all the survival equipment of astronauts, it takes electricity. So far, solar panels offer the best solution. Easy to produce, they can produce correct amounts of energy. Their main problem is their dependence on the sun : their yield deteriorates strongly in case of low sun exposure. Thus, solar panels are almost of no use near Jupiter.

A solar panel in Earth orbit produces a power of about 300 watts per square meter, while in orbit around Jupiter a solar panel produces only 6 watts per square meter. As NASA would like to generalize the use of a plasma engine for the exploration of the external solar system, a powerful and efficient energy source is needed. It is therefore to find a solution to this problem that NASA has launched a nuclear system project called Kilopower. The project consists in designing a small nuclear fission reactor of less than 2 meters capable of providing power of one kilowatt to ten kilowatts.

Kilopower must therefore be able to provide energy for a range of applications, for example a space probe or an inhabited base on the surface of Mars. Two prototypes are under study : the first should be able to provide a power of around 800 watts, the average power used by a space probe. The second prototype would be a more powerful version able to provide between 3000 and 10000 watts, the energy needed for a small base inhabited on Mars. Some elements of the system, such as the radiator dissipation, will be tested directly on the International Space Station (ISS).

The design of the reactor is very different from a civilian nuclear reactor, and even military as found on submarines. The conversion of the heat generated by the nuclear reactions will not be done by a steam turbine but will use Stirling engines. These motors are able to drive a generator from a temperature difference. This is how NASA hopes to contain three nuclear power plants in dimensions slightly less than 2 meters. The use of nuclear energy in space is for the moment limited to RPGs, batteries operating with radioactivity. Realizing a nuclear power plant project even of very low power represents a new challenge, because in the 50s and 60s a program of Areva had developed a nuclear space engine after twenty years of research, but the project was abandoned then that he became operational.