All about the magnetic shield for spacecraft and news 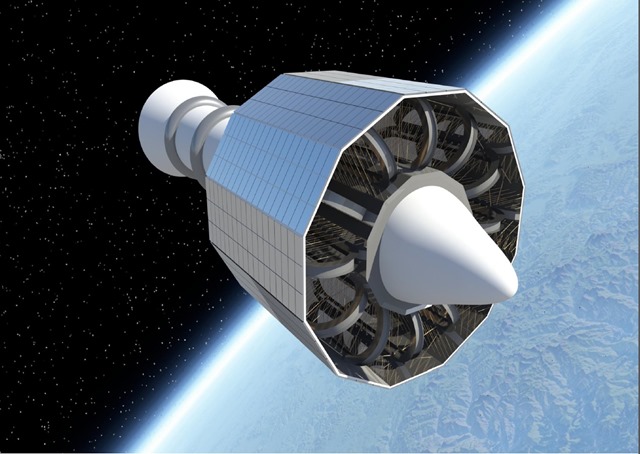 NASA presents a concept of a magnetic shield for spacecraft

When we interest in interplanetary travel, we immediately thinks of the problem of acceleration. How can a spacecraft go fast enough to free itself from Earth’s gravity and travel to another planet in a relatively short time ? What we sometimes forget is that on arrival we must also be able to brake to get into orbit. The standard solution is to use the same thrusters that were used for acceleration, which means a new high fuel expense. Yet there is another solution that costs almost nothing in propellants, it is the aerocapture. The principle is to use the upper layers of the atmosphere of a celestial body to brake the spacecraft. It may seems simple, but friction against an atmosphere at interplanetary speeds is very dangerous for a spacecraft. The main problem comes from the very high temperatures generated by the atmospheric drag. This forces the spacecraft to take with it an imposing thermal shield that cancels out all the benefits generated by fuel economy. This is why aerocapture maneuvers have never been attempted.

NASA presented at the end of last month a solution that could make this much more attractive. It’s about using what might be called a magnetic shield. A magnetic field of about 500 Gauss is produced from the spacecraft. Plasma is then injected at a low temperature. It will capture particles from the atmosphere, which will help slow the spacecraft. The advantages of such a solution are immense. First, there is the weight because a one-ton electromagnet can replace a 20-ton heat shield. We can completely do without a heat shield because it is the plasma that will absorb all the thermal shock. In addition, the magnetic shield is controllable and therefore adjustable according to atmospheric conditions. Finally, the system allows speeds well beyond anything that can be done with a physical shield.

The team that presented the project calculated that a 2.5-meter magnet would be enough to generate a magnetic shield 21 meters in radius, which could be used for entering a 30 tons payload in the Martian atmosphere. A CubeSat will be prepared to test the concept in Earth orbit. It will deploy a magnetic shield 1.20 meters in diameter for 5 periods of 800 seconds. Thanks to its onboard batteries, it should allow it to reduce its speed enormously.