All about nuclear thermal propulsion in space and news 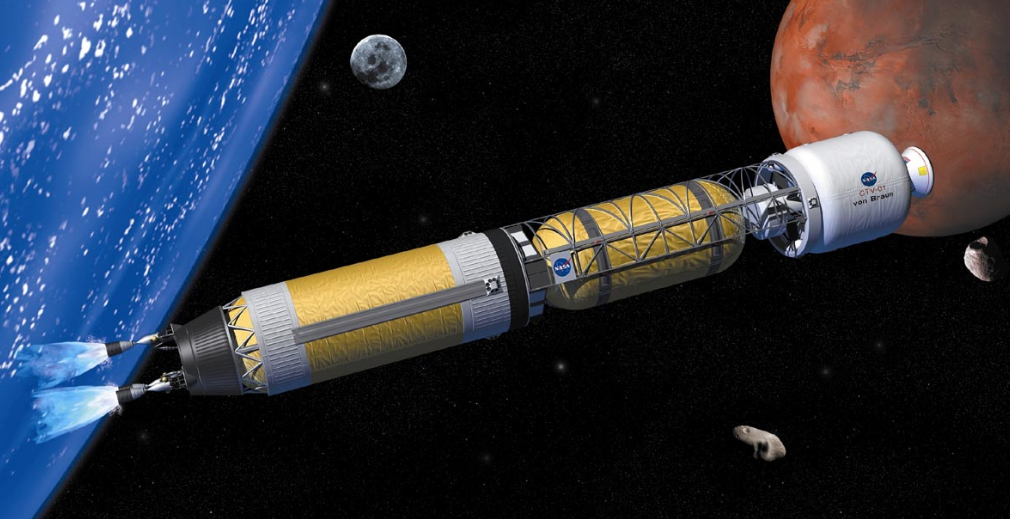 The performance of nuclear thermal propulsion could be boosted

Nuclear engines achieved advanced development as early as the 1960s. Nuclear thermal propulsion (NTP) provides thrust by reducing pressure of hydrogen through the heat of a nuclear reactor. This generates a strong thrust but it is insufficient to propel a first stage of rocket, or a SSTO spacecraft.

In 2015, an engineer who worked on SpaceX‘s Raptor engine envisioned a way to improve the power and efficiency of such a system. It involves taking air into the atmosphere to add a combustion cycle to nuclear thermal propulsion. In such an engine, the hydrogen is first expanded by being heated by a nuclear reactor. It is then injected into a combustion chamber where it burns in contact with atmospheric air. This results in a sharp increase in the thrust and the specific impulse.

During the first phase of flight, this engineer thinks that such a system would produce enough energy to power a SSTO rocket and to be able to bring a large payload in low orbit and beyond. Obviously these rockets should be reusable to be economically viable because the applied technologies will be very complex. We will not see such an engine for a long time.

The Nuclear Engine for Rocket Vehicle Application (NERVA) allowed NASA to develop a nuclear thermal engine in the 1960s and 1970s. NASA decided to invest again in nuclear thermal propulsion. Indeed, the US space agency has decided to invest 18.8 million dollars to revive research on this type of engine. In order to develop a new concept for a nuclear thermal engine, NASA has partnered with BWXT. This company is specialized in the design of nuclear solutions and nuclear fuel. For example, it manufactures fuel rods for US Navy aircraft carriers and submarines. The contract with BWXT will last three years and the private company will be responsible for designing and testing a prototype nuclear fuel for a NERVA type engine. In addition to this, BWXT will bring its expertise to the US Space Agency to study the possibility and cost of such an engine.

For now, it is impossible to say whether the US Space Administration will capitalize on this research to really launch a new nuclear thermal engine. We can also imagine that all or part of this research could also be used to develop a nuclear reactor that can supply energy to electric motors, such as the VASIMR engine. This budget is part of a program called Game Changing Development to identify and test technological breakthroughs that could change the way NASA designs its space missions.

When seeking to increase the possibilities of travel in space, propulsion is often the limiting factor. There is a myriad of ways to overcome chemical engines. The nuclear option is a bit peculiar because it is always associated with an environmental risk and a strong pressure of the public opinion. During the launch of the Cassini space probe in 1997, there were demonstrations because the space probe carried 32 kilos of plutonium to feed its RTG, thermoelectric generators using heat from radioactivity to produce electricity, but without any reaction fission. The shipment of radioactive material into space had been approved after a long series of tests demonstrating that even in the event of a rocket explosion, the RTGs would remain intact. If NASA decides to develop nuclear power, it should be able to design a reactor or engine capable of withstanding all possible failures when it is launched. So there is still a lot of work before seeing such an engine in action.