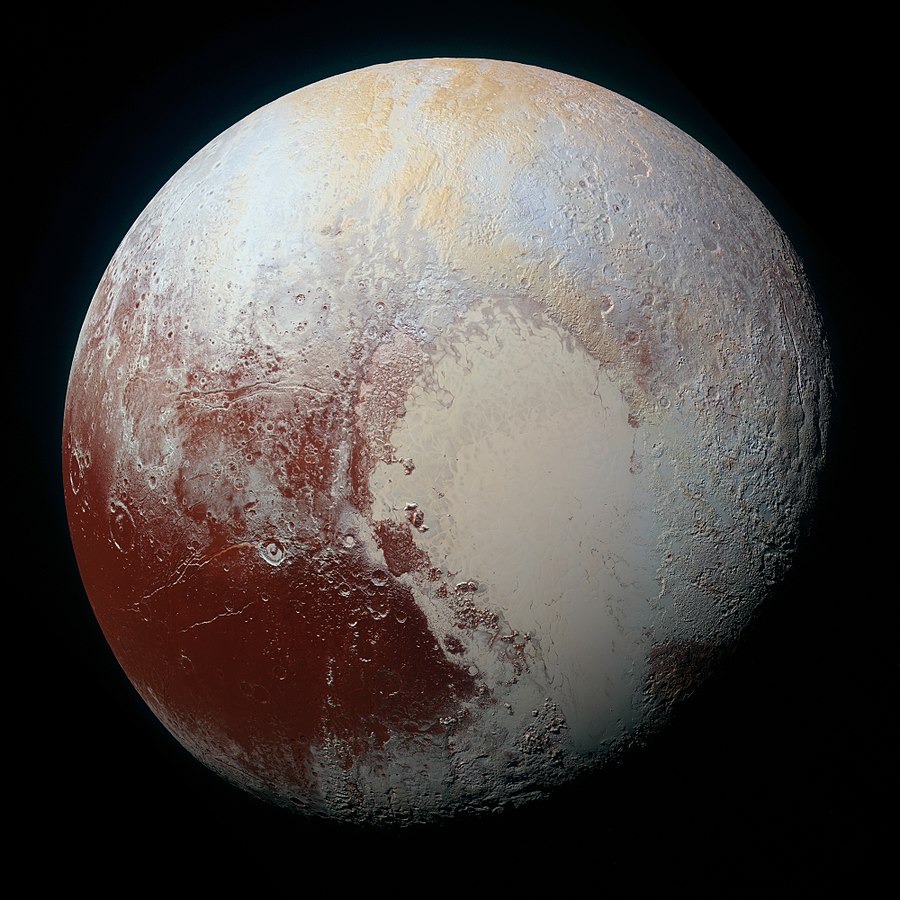 Pluto was explored four years ago by the American space probe New Horizons. This speed meeting allowed to make some beautiful photos that generated many questions. Pluto’s surface seems much more active than previously thought, which makes some people think that the dwarf planet could even have an underground ocean.

A map of Pluto available thanks to New Horizons

Because of its high speed, New Horizons could only map half of Pluto. The dwarf planet rotates in six Earth days, which is far too slow for the space probe. But after a few years of analysis, NASA managed to create an almost complete map. The information was extracted from the long approach phase, while New Horizons was still millions of kilometers from Pluto.

The images make possible to distinguish geological differences between the two faces of the dwarf planet. The face that was flown over by New Horizons is dominated by a structure called Sputnik Planum, an immense plain of ice, nitrogen and methane of 2000 km long. There is nothing similar on the other side, which is nevertheless very interesting. It has huge crystalline structures spread over large areas. This may be what drives NASA to consider sending a space probe around Pluto.

Pluto could be studied by an orbiter

The US space agency has just allocated a budget to one of its institutes to start studying this idea. Initially, the goal is to evaluate the feasibility and the costs of such a project. A flyby over Pluto for the first time was already a feat, but it will take a much more powerful space probe to orbit the dwarf planet.

The main problem to be solved is fuel. To reach Pluto quickly, for example in less than 10 years, you have to go very fast. This means that we must also slow down a lot on arrival. This very expensive maneuver in term of energy requires to carry tons of propellants. After two years in orbit of the dwarf planet, the space probe will have to perform a gravitational assist maneuver around Charon, the moon of Pluto, and propel itself into the Kuiper belt to explore another celestial object.

This flight plan would be possible thanks to electric propulsion. Ionic engines will be used to reach the desired speed over very long periods. For NASA, this is a perfect way to resolve a dilemma it has since New Horizons: should the US space agency continue its exploration of Pluto or focus on other objects in the Kuiper belt?

The Earth-Pluto distance is a real challenge for telecommunications

This mission should also meet another challenge, telecommunications. To transmit the data accumulated during the 24 hours of its overflight, New Horizons needed 16 months of transmission. An orbiter would generate much more data. It should therefore be possible to transmit these data quickly, at the risk of completely saturating the memory of the space probe. A much more powerful communication system than New Horizons’ is therefore necessary. This requires a better power supply, so a larger mass, so more propellants, and so on.

Are there sand dunes consist of frozen methane on Pluto ?

Pluto, the distant dwarf planet, is no longer so mysterious since it was flown over by the New Horizons space probe in the summer of 2015. The images from the surface have allowed us to observe a world with much more geological diversity than expected. Some of the geological formations observed on the surface of Pluto appeared only half a million years ago. Among these, an interuniversity team thinks they have identified sand dunes. In a study published in early June in the magazine Science, the team focuses on ripples located in the Sputnik Plain area, a large basin 1000 km wide covered with ice. West of this basin, near a mountain range, the New Horizons photos show polygons separated by dark borders. By observing these formations a little closer, we can see wrinkles, which immediately evokes the dunes observable on Mars. Along these wrinkles, one can also distinguish black trails all oriented in the same direction, as if they had been formed by the wind. But how could dunes have formed on Pluto ? The planet does not really shine because of golden beaches and its atmospheric pressure leaves little room for wind that could carry sand.

The hypothesis of the team at the origin of the study is that the sands of Pluto consist of small particles of methane ice of a few hundred micron each. These particles would be light enough to be transported by the strongest winds of the dwarf planet. These winds would form down mountains and it is precisely at the foot of a mountain range that the dunes were observed. If the winds of Pluto are strong enough to carry these grains of methane, they are not enough to raise them. This is where the phenomenon of Pluto’s ice sublimation works : when heated by the sun, the ice on the surface of the dwarf planet goes directly into the gaseous state. This sublimation could carry some grains of methane in its ascent. At a certain altitude, the winds of Pluto would take over and accumulate these sands in the huge dunes observed by New Horizons. Different phenomena can give rise to similar formations. The dunes of the Earth and Pluto do not have the same origin at all, and yet they look the same from space.

The dwarf planet is in any case the object of other studies by the researchers : another study published a few days ago proposed a hypothesis concerning the formation of Pluto. Comet 67P / Churyumov-Guerassimenko explored by the Rosetta Probe presents a composition strangely similar to the Sputnik plain glacier. This gives the impression that the small planet is the result of the agglomeration of comets. About 1 billion of them could have allowed Pluto to form. This differs from the usual model which assumes that Pluto would have formed directly in the protoplanetary disk and thus have a chemical composition quite close to the sun. It is still difficult to decide between the two hypotheses because none can fully explain the current composition of the dwarf planet. The Kuiper belt is still very mysterious. Maybe the overview of the 2014 MU69 object by New Horizons that will take place in a few months will bring new elements.