All about pulsars and news 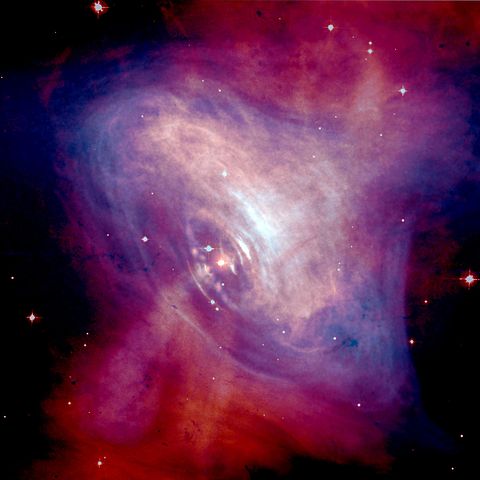 Supernovas and pulsars are linked because a supernova can give birth to a pulsar. When some massive stars arrive at the end of their life, their hydrostatic balance is broken. The thermonuclear reactions that take place in their center can no longer compensate for the enormous gravitational pressure. The heart of these stars eventually collapses in a split second. The shock wave bounces and expels the outer layers of the star. This phenomenon is called a core-collapse supernova.

The whole mass of the star is not vaporized in these gigantic explosions. Supernovas thus give birth to new, very dense stars that result directly from gravitational collapse. They are neutron stars and in the most extreme cases they are black holes. Neutron stars emit radiation along their magnetic axis. As they are in rapid rotation, this radiation can sometimes scan the Earth, giving the impression that these stars are flashing. This phenomenon is called pulsars.

In a photo that includes observations in visible light or infrared and radio, the big bubble that occupies the center of the photo is a supernova remnant, and the tail that escapes from this pulsar is called PSR J0002 + 6216. It was created by the supernova. The action takes place at 6500 light years from home, in the constellation Cassiopeia. PSR J0002 + 6216 was discovered in 2017 and thanks to a citizen science initiative called Einstein@Home. This initiative uses people’s computers around the world to analyze data from the Fermi telescope. Thanks to the data colleted by the telescope, a scientific team was able to determine the expulsion speed of the pulsar, which is incredible.

The explosion of the supernova propelled PSR J0002 + 6216 to nearly a thousand kilometers per second. To realize the gigantic energies that generated this speed, we must remember that despite its small size, this pulsar has a greater mass than the sun. Astronomers are not yet certain of the mechanisms that have accelerated the pulsar at this level. Perhaps an asymmetry during the collapse of the star gave birth to a dense region that has survived long enough to play the role of a catapult.

PSR J0002 + 6216 is now going so fast that it has passed the supernova remnant. It is indeed slowed down by its interactions with the interstellar medium. But it will take more to really slow down this ultra-dense cannonball launched at a significant fraction of the speed of light. In just ten thousand years, PSR J0002 + 6216 has traveled 53 light years. Its long tail alone measures 13 light-years. It is due to the shock waves produced by the pulsar while crossing the interstellar medium.

By continuing the observations on radio waves and X-rays, a team of scientists hopes to unravel the mystery of this high speed pulsar. This is an opportunity to find valuable clues about the complex physics that generates the collapse of the heart of a star. Meanwhile, PSR J0002 + 6216 is off to leave the galaxy.

Pulsars can rotate up to 1500 revolutions per second

During their life, pulsars slow down. The youngest pulsars can be very fast. The record is currently held by PSR J1748-2446ad which performs more than 700 rotations per second. This means that at its equator, the ground scrolls at a quarter of the speed of light. The theoretical limit is probably around 1500 revolutions per second. Beyond this speed of rotation, a neutron star would explose. The speed of rotation of most pulsars slows down during their life.

But when they are close to a star, they can accelerate by absorbing its matter. They also absorb kinetic momentum. This is the case of PSR J1748-2446ad. To accelerate so much in such a short time, the pulsar probably cannibalizes the star very quickly thanks to this mechanism. Pulsars that had a very low rotation can thus speed up when they cross a star in their path.

Planets close to pulsars could in theory accommodate life

There may be planets around the pulsars. The question of whether the planets around the pulsars can accommodate life is still debated, but that does not prevent to make some assumptions. Last year, two European researchers published a theoretical study on the conditions necessary on a planet to allow life near a pulsar. For them, life would be possible under certain conditions.

First, the planet should be located at a great distance from the neutron star. Even if it is only a few tens of kilometers in diameter, it must be located at one astronomical unit at least. Even at this distance, the planet should be massive enough to retain its atmosphere despite the huge bombardment of pulsar radiation. And only the super-Earths could claim to maintain their atmosphere, which should be about a million times denser than ours. We would then be in conditions roughly similar to the deep seabed of the Earth.

Our galaxy probably contains hundreds of thousands of pulsars and many more neutron stars. Perhaps for one of these systems, the conditions necessary for the emergence of life have been met.