All about quasars and news 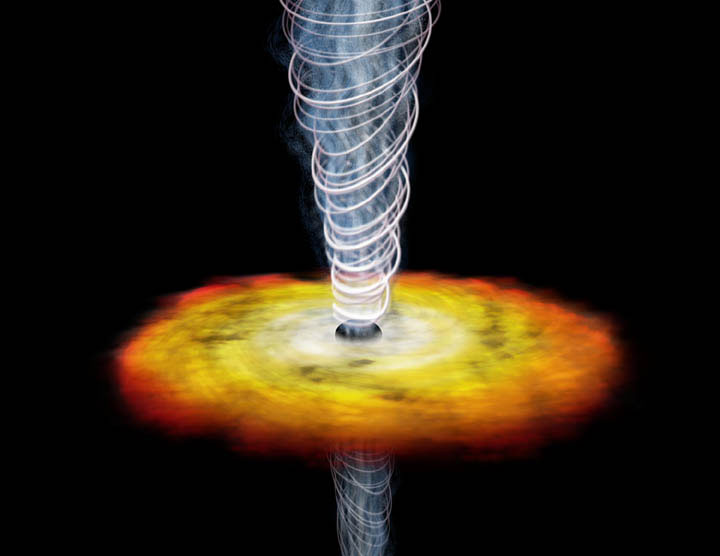 Quasars are very active nuclei of galaxies. In these nuclei, an extremely massive central black hole accumulates matter in its accretion disk, then expels it along the lines of its magnetic field. The energies are so strong that the jets of matter of a quasar can approach the speed of light. This material climbs to incredible temperatures, so much so that the quasar and its gas jets are the most intense sources of light ever detected. This means that we can observe them at a great distance and therefore go back very far in the history of the universe.

Two articles have just been published in the scientific journal The Astrophysical Journal. They detail the discovery of a very interesting quasar. The light of the quasar PSO J352 4034-15 3373 was issued 13 billion years ago, when the universe was a few hundred million years old. But our models indicate that at that time, the universe was very different from what it is today. The stars and galaxies that were created on these dates do not have much in common with the more recent stars and galaxies. We observe the quasar PSO J352 4034-15 3373 to find tracks of this period of the history of the universe called reionization.

During its youth, the universe was opaque. For a few hundred thousand years, it was a set of elementary particles. Protons, neutrons and electrons co-existed without being able to create atoms. The first atoms of hydrogen and helium appeared thanks to the cooling of the universe. This epoch is called recombination. With the first atoms appear also the first lights. After recombination, the universe has become a vast field of hydrogen and neutral helium. It took another 400 million years for the first stars and galaxies to be created.

These first stars are monsters of 1000 solar masses. They burn very quickly and die in gigantic explosions, giving birth to the first black holes. The radiation of this first generation of stars ionize the surrounding hydrogen clouds. This is why this epoch is called reionization for this part of the history of the universe. But for the moment, this chronology still gives rise to debates.

The quasar PSO J352 4034-15 3373 is interesting because it allows diving at the end of this reionization era. PSO J352 4034-15 3373 is not the oldest element to have been observed. For the moment, the age of the galaxy GN-z11 is estimated at 400 million additional years. The quasar PSO J352 4034-15 3373, however, is much brighter, making it an ideal object of study for the beginnings of the universe. The images taken of the quasar are three light tasks, probably the accretion disk of the black hole and its jets of matter. It is assumed that at the time of reionization, galaxies were much smaller than today. They then merged for billions of years to give birth to huge structures like the Milky Way.

By measuring the gas ejection velocity from the quasar and studying the absorption lines of the light emitted by PSO J352 4034-15 3373, we should be able to specify our models about the beginnings of the universe. As the universe is in perpetual expansion, this ancient galaxy is now about forty billion light-years away from the solar system. Since then, it has probably changed, perhaps merged, or perhaps extinguished.