All about Stratolaunch and news 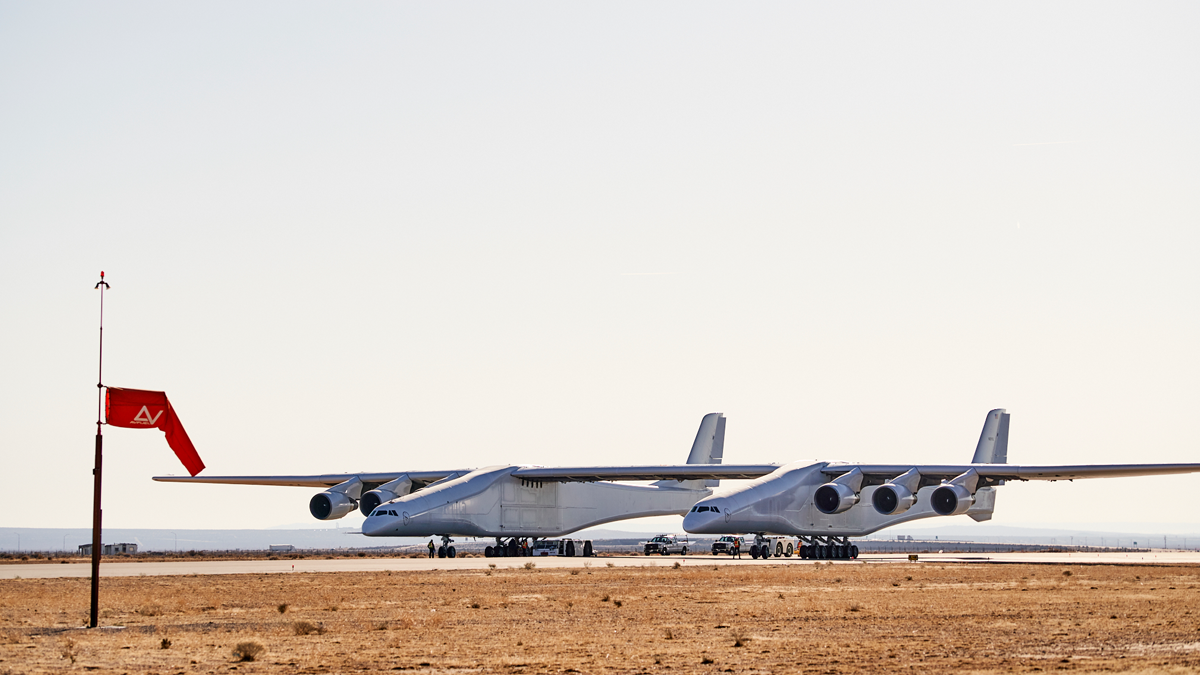 The Stratolaunch giant plane takes off for the first time

In October 2018, Paul Allen, the famous co-founder of Microsoft, passed away. Like many other famous people in Silicon Valley, Paul Allen dedicated the last years of his life to the space adventure, first by funding the SpaceShipOne which was the first private spacecraft to bring men into space . He then founded Stratolaunch Systems, whose goal was to launch orbital rockets using a giant aircraft.

The giant Stratolaunch plane just flew for the first time. The Stratolaunch aircraft has a double fuselage and a wingspan of 117 meters. It is the largest airplane in the world. Its six engines allow it to fly despite its weight of 590 tons when it carries its payload. To make such an aircraft fly is very difficult. To ensure the viability of the concept, a test was necessary.

The giant Stratolaunch aircraft flew for nearly two and a half hours, reaching a speed of 304 km/h and an altitude of 5182 meters. The aircraft behaved very similarly to its simulator during all phases of the flight. However, Stratolaunch has not yet communicated on the continuation of the test program. We imagine that it is now necessary for Stratolaunch to fly with Pegasus-XL launchers under the wings.

This step allows Stratolaunch Systems to be more serene because the period that followed the death of its founder was difficult. In January, we learned that many internal developments have been abandoned. Stratolaunch originally wanted its aircraft to carry a range of launchers, from light rockets to reusable space shuttle. Since then, the American company has simplified its offer. It will not use her own rockets to reach space. It will use launchers from other companies.

So far, the only launcher that has been chosen to take off under the wings of the plane is Northrop Grumman’s Pegasus-XL, priced at around $ 40 million. It’s much more expensive than any Smallsats launchers on the market, for example the Electron launcher. The Stratolaunch aircraft was designed to carry even more powerful rockets. At first, a modified version of the Falcon 9 was chosen in this airborne configuration. It could have placed six tons of payload in low orbit. Stratolaunch could also launch a modified version of Sierra Nevada Corporation’s Dream Chaser space shuttle.

Stratolaunch develops its own launchers, and even a space shuttle

Stratolaunch is not expected to launch until 2020. The ambitions of the company are enormous, starting with their carrier aircraft which will be the largest aircraft in the world thanks to its size. This mastodon will be able to embark a whole range of rockets under its wings. The first launch will be carried out thanks to the Pegasus-XL launcher which has been flying since the 1990s. For the future, Stratolaunch will develop its own launcher internally, and even a space shuttle. The company has unveiled its future vehicles on August 20.

The first of these vehicles will be the Medium Launch Vehicle (MLV). It will allow Stratolaunch to leave the Smallsats domain, since the launcher will be able to place 3.4 tons in low orbit. The commercialization is planned for 2022. Then, Stratolaunch will propose a Heavy version of the MLV, equipped with two boosters. The aircraft and its launcher will be able to launch 6 tons in low orbit. Finally, a fully reusable space shuttle will allow to orbit payloads and bring them back to Earth, as would do the Boeing X-37B or Space Rider of the ESA. There is no announced date for this vehicle which is still in the preliminary studies phase.

Stratolaunch has huge ambitions and can afford it thanks to funding from its creator, Paul Allen, who is also known to have co-founded Microsoft with Bill Gates. In any case, airborne launchers intend to play an important role in the launching market. We will see if the benefits of this architecture will be enough to convince many customers in the long run.

The idea of ​​launching spaceships from airplanes has been of great interest for a few years. Scaled Composites specializes in this sector : it developed the SpaceShipOne that won the Ansari X Prize, and the White Knight Two carrier aircraft in collaboration with Virgin Galactic. Richard Branson’s company promises to offer suborbital flights for wealthy tourists in the near future, but Stratolaunch is also working on a second concept of rocket launchers with disproportionate proportions.

Stratolaunch Systems was founded in 2011. Again, it is a billionaire from the world of new technologies that is at its head : this time it is Paul Allen, co-founder of Microsoft. Stratolaunch aims to use the world’s largest aircraft as a launch pad for light orbital rockets.

In theory, this approach has many advantages : no need to worry about the weather, one of the biggest delay factors for launchers leaving the ground. The rocket is started directly in the stratosphere, which inspired the name of the company. No need to worry about high winds either. Another advantage : cut back on infrastructure. The rocket does not need launch facilities, which are often expensive to build and maintain. It also means that it is possible to fly the plane as close as possible to the equator when the low orbit is aimed at, or on the contrary to get closer to the poles when the polar orbit is aimed at. And of course, even if the altitude of flight and the speed of an aircraft remains very low compared to what must provide a rocket, it still represents a saving of energy during firing.

The Stratolaunch aircraft has just completed speed tests. The plane has reached up to 74 km/h, which however is still far from a take-off speed. The steering and braking systems have been tested, apparently successfully. Stratolaunch did not provide a schedule for further tests or the date of the first flight.

Once operational, this carrier aircraft will be able to carry the Pegasus XL rocket manufactured by Orbital ATK. Pegasus XL is the pioneer of air launches. Operational since the early 90s, it has participated in more than 40 missions under the wings of different carrier planes. In its Stratolaunch-controlled configuration, Pegasus XL can deliver just under half a ton of payload in low orbit. The carrier plane that Stratolaunch builds is so gigantic that the company hopes to be able to use it to ship up to three Pegasus launchers per flight. But it was not built specifically for Pegasus : so it should be able to carry other rockets, with some modifications. Stratolaunch would probably like to develop its own launcher. The company signed an agreement last November with NASA to gain access to its thruster testing infrastructure.

Stratolaunch, the plane that puts rockets into orbit

Stratolaunch System is a company created in 2011 by Microsoft co-founder Paul Allen. The Stratolaunch launcher concept is relatively similar to the Virgin Galactic one : a carrier plane brings a rocket aloft in the air before it ignites its own engines to reach the space. Except that at Stratolaunch, the carrier plane is simply the largest aircraft ever built by mankind. An Airbus A380 post has a wingspan of just under 80 meters, in comparison the size of the Stratolaunch carrier plane is 117 meters.

Stratolaunch System used the same subcontractors as Virgin Galactic for the construction of this aircraft. This probably explains the strong similarities in the design. The original plan, however, was to outsource the system’s rocket manufacturing to SpaceX but, failing agreement, Orbital ATK was selected for the partnership.

The rocket’s performance is still unknown. the first specification that Stratolaunch had sent to Orbital ATK mentioned a rocket able to carry a payload of 6 tonnes. But with the subcontractor’s inability to build an economic rocket, it seems that Stratolaunch has to turn to a less ambitious solution.

A version for manned flights is also under study. The carrier aircraft would then serve as launcher for the Dream Chaser shuttle by the company Sierra Nevada. This would allow Stratolaunch to focus on reuse without having to deal with all the technical barriers that accompany the development of a first floor. The first operational flight is scheduled for 2019.