VASIMR : all about the plasma engine and news 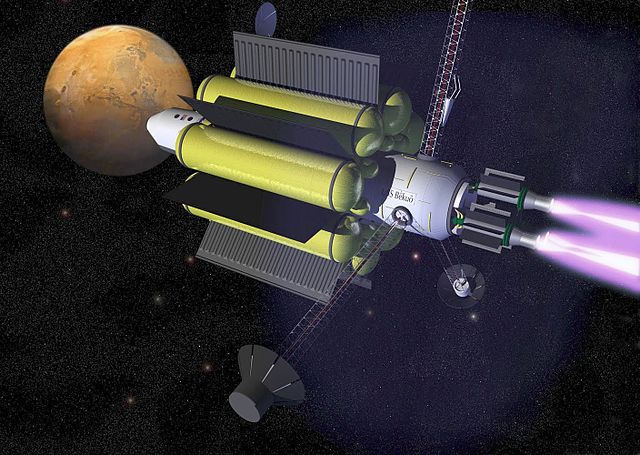 The development of VASIMR continues under the control of NASA

The VASIMR engine is able to vary its specific power and impulse. Like ion engines, it can operate for very long durations to provide slow but very economical propellant acceleration. It can also provide a very strong boost but less economical, provided you have a powerful source of electricity available. VASIMR is very promising but also needs a lot of energy.

The operation of VASIMR is complex and involves many techniques of electric propulsion. Hydrogen and helium are brought successively at a temperature of 30,000 degrees and then several million degrees, which transforms it into plasma. That would be enough to produce a big push. But the VASIMR plasma engine is more efficient : by heating the plasma it is then possible to accelerate it even more, thanks to magnetic fields. Also a magnetic nozzle directs the plasma in the desired direction to produce a thrust. The plasma ions then reach a maximum speed of 50 kilometers per second.

Ad Astro Rocket has just passed the second stage of a contract with NASA. Indeed, in 2015 NASA has invested $ 10 million for Ad Astra Rocket so that the company carries out extensive testing of its VASIMR engine. The objective is to carry out in 2018 a test of continuous operation of the VASIMR plasma engine with a power of 100 kilowatts.

One of the major challenges ahead is VASIMR’s power supply. In its current design, the engine is designed to operate optimally at a power of 200 kilowatts. But even the huge solar panels of the international space station can not provide a power greater than 120 kilowatts. A nuclear reactor identical to those of the aircraft carriers would be sufficient. Like many means of propulsion, VASIMR is limited by the unavailability of such sources of energy.

Image by NASA; Posted in Public domain, via Wikimedia Commons