All about exoplanets and news 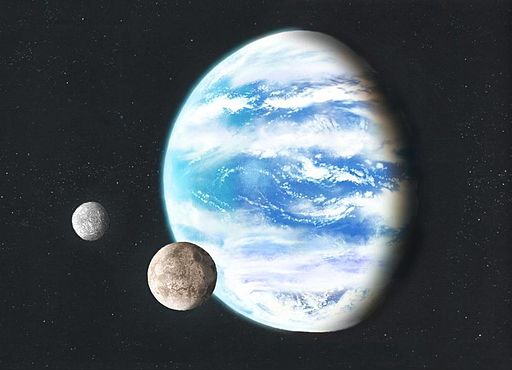 Most of the time, only very limited information can be obtained about exoplanets, worlds that orbit distant stars. By combining detection methods, it is possible to know more or less accurately the diameter, mass and orbital parameters of these exoplanets. Yet, these few pieces of information can already tell fascinating stories.

The Kepler-107 system is located 1700 light years from us. Kepler-107 is a spectral type star G2, quite similar to the sun. The Kepler-107 system has four planets in very close orbits. Their revolution around the star last between 3 and 14 days. The two planets closest to the star are mysterious. They orbit very close to each other and have a fairly similar diameter. Yet one is almost three times more massive than the other.

Kepler-107 b, the closest planet to the star, is three and a half times more massive than Earth, and has a radius 50% higher. Kepler-107 c, an exoplanet that orbits a little further, has about the same radius but its mass is almost ten times greater than the mass of Earth. This indicates that these two exoplanets have very different densities and compositions. It’s hard to explain this phenomenon. If we think that they were formed close to each other, their composition should be quite similar, which is not what we observe.

The impacts between planets are probably quite commonplace for young planetary systems. Even in the history of the solar system, we think that such events have occurred. In the same way as for Kepler-107 c, the high density of Mercury could be partially due to an impact that would have volatilized part of its mantle. And the birth of the Moon would be the result of the collision of a planetoid with Earth. The inclination of Uranus is probably the consequence of several monstrous impacts.

With the data we have, it’s hard to be sure that we know the true story of Kepler-107. It will be necessary to observe similar situations in other planetary systems, which is an ideal mission for the TESS space observatory, which is just beginning to communicate its first discoveries.

How to know if an exoplanet is likely to welcome life ? Every year, new instruments are used to improve our knowledge of our extrasolar neighbors. But even knowing their mass, diameter and the parameters of their orbit, we are still unable to answer this question. For the moment, we rely on the concept of habitable zone. Depending on the energy emitted by a star, we can calculate how far a planet must be from its star to have liquid water, a parameter that is assumed to be fundamental to the appearance of life.

But the concept of habitable zone is far to be enough to decide on the habitability of a planet. The presence or absence of a magnetic field, of an atmosphere, its density and composition can greatly influence its habitability. The Earth-Moon pair is a good example : the two stars orbit exactly the same distance from the sun, but while the Earth is full of life, the Moon is a rocky ball completely dead. Another important parameter is the activity of the system star. The known exoplanet closest to the Earth is Proxima b, an exoplanet discovered two years ago. It is a planet of terrestrial mass orbiting in the habitable zone of Proxima Centauri. In a study just published, we learn that Proxima Centauri experienced a devastating eruption a few years ago. The star has released so much energy that it has become visible to the naked eye from Earth for a few seconds. If there were people on Proxima b, they are now decimated.

This is not the first time this has happened, as 23 eruptions of the red dwarf have been observed in the last two years, but those observed in March 2016 was ten times more powerful than the others. The frequency of these super-eruptions of Proxima Centauri is not yet known because only one eruption has been observed. These repeated solar eruptions are probably a hindrance to the appearance of life around red dwarfs. If the Earth orbited in the habitable zone of Proxima Centauri, as Proxima b, its ozone layer would be destroyed in five years. Denuded of protection, the Earth would be bombarded with ultraviolet rays that would decimate all life.

To meet our galactic neighbors, it will probably be necessary to look further than Proxima Centauri. It is estimated that nearly 80% of the stars are red dwarfs and that two thirds of them experience violent and frequent eruptions. Unless some life forms are capable of capacites never seen on Earth, half of the stars of the galaxy can be abandoned in our quest for extraterrestrial life. This can be seen as both good news and bad news. The probability of discovering life around a star is statistically halved, but we now have better information to search in the right place.

Exoplanets from another galaxy would have been detected

Thousands of exoplanets have already been discovered in our galaxy using many detection techniques. But for the first time, a team of astrophysicists from the University of Oklahoma think they have detected exoplanets located in another distant galaxy. To achieve this result, they studied the combined effects of gravitational lenses and gravitational microlenses. They made their observations with the Chandra X-ray space telescope.

The technique used consists in observing a quasar, a galaxy with a very energetic nucleus. By focusing on the accretion disk that surrounds the central black hole of the quasar, it is possible to observe small perturbations produced by gravitational micro-lens effects. These disturbances are in fact due to planets located in the nearest galaxy, those which produce the effect of lens. The planets thus detected by the Oklahoma University team are wandering planets, ie they do not orbit around any star. These are the only planets detectable with this method. For planets orbiting around a star, their effects of gravitational micro-lenses is indeed too hard to distinguish from that of their star.

They have masses estimated between that of the Moon and that of Jupiter. The galaxy where these planets are located is 3.6 billion light-years away from Earth while the quasar that served as the background of observation is 6 billion light-years away. Such distant observations could not have been made using traditional methods, even with telescopes worthy of science fiction. The distance is too high.

These observations confirm that there are planets outside our galaxy. It seemed obvious, but without any proof it was only a hypothesis. It is also an additional clue to try to determine the amount of wandering planets that roam the galaxies of the universe. Estimates vary widely. Some astronomers think that there are more wandering planets than stars. It also demonstrates that gravitational lenses and gravitational micro-lenses can be used to make observations beyond our engineering capabilities.

The exoplanet Ross 128b is a credible candidate to welcome life

For a little over a year, the discoveries of potentially habitable exoplanets follow one another. Proxima Centauri and TRAPPIST-1 are two stars that seem to harbor planets compatible with life. The list has just lengthened with the planet Ross 128b. Its parent star Ross 128 is a rather calm red dwarf. Many red dwarfs are subject to frequent solar eruptions that flood their planets with X-rays and ultraviolet rays, which is not very conducive to the appearance of life. This is for example the case of Proxima Centauri, the star closest to our solar system, which is also a red dwarf. The star Ross 128 is therefore rather lenient, which is good news. It is located just 18 light-years away from Earth, which is extremely far away but it’s still one of our neighbors.

Ross 128 is heading in our direction. In a little less than 80 thousand years, it should replace Proxima Centauri as the star closest to our sun. Ross 128b, the planet orbiting its star, is at a distance 20 times smaller than the distance Earth-sun. This is partly why we could easily detect it. As its star is much less hot than ours, it does not affect the conditions that prevail on its surface. The surface temperature of the exoplanet Ross 128 b should therefore be between -60 degrees Celsius and 20 degrees Celsius. But it is a theoretical temperature, which takes into account only the light received by its star. But as Mars or Venus show, the presence of an atmosphere can greatly influence the temperature. Impossible for the moment to know more about the presence or not of an atmosphere on the exoplanet Ross 128 b. Ross 128 b is more likely to have an atmosphere than the planets that orbit around Proxima Centauri and TRAPPIST-1.

Red dwarfs are a prime target for exoplanet hunting because they are the most numerous stars in our galaxy and in the universe. They are also extremely stable stars, able to shine for hundreds or even trillions of years. Many of them also seem to house planetary systems. It is not known for the moment whether these systems are compatible with life. The only known example of development of life is around our sun, which is a yellow dwarf. The next step will be to study the exoplanets more and more precisely to perhaps one day find a twin sister to the Earth. Ross 128b is for the moment the best candidate in our immediate neighborhood.