LEGO hits another home run with this kit celebrating the 50th Anniversary of the Apollo 11 moon landing. Of course it is a LEGO version of the Lunar Lander, but it is remarkably accurate and you actually learn about the lander when building it! 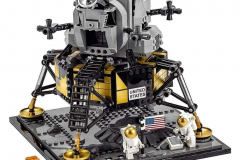 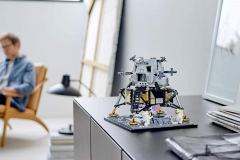 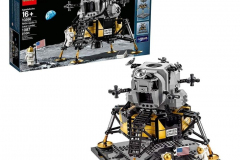 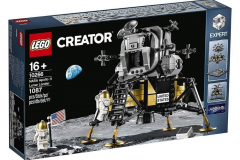 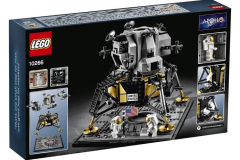 Our review of the LEGO Apollo 11 Lunar Lander

This LEGO set is a really thoughtful LEGO representation of an important piece of US History. From 1969 to 1972 humans landed on the moon 6 times. Between 2019 and 2022 are the 50th anniversaries of these landings and this LEGO set is a wonderful way to explore the lunar lander of Neil Armstrong and Buzz Aldrin. This is a detailed set, having over a thousand pieces (1,087 in total). 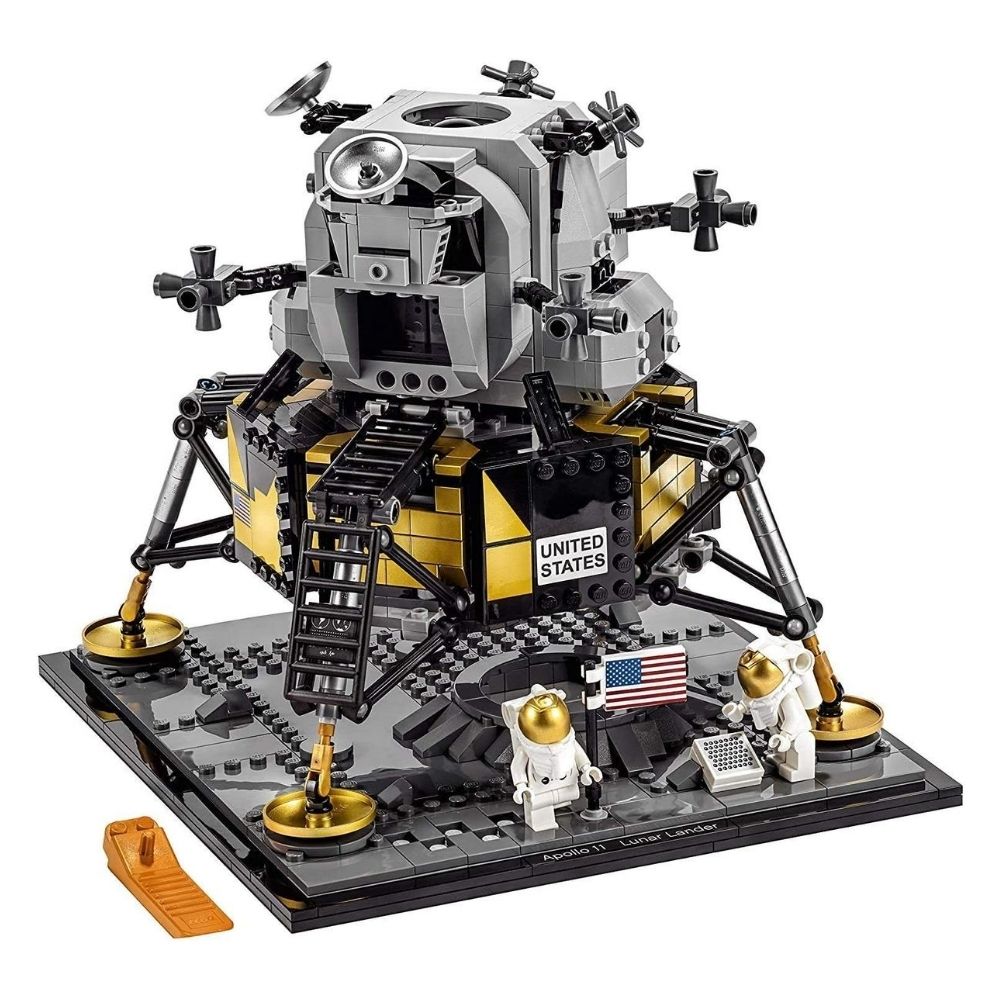 LEGO partnered up with NASA to make this. That collaboration screams through on this LEGO set. This set carries the official NASA tag and is part of the Creator series. The Creator series usually has more complex builds and more details than the classic LEGO sets. That is definitely the case with this reproduction of the Apollo 11 Lunar Lander.

In the box there are 9 numbered bags of LEGO containing 1,087 pieces. Many of the pieces are specific for the LEGO Lunar Lander. Many pieces have metallic colors that coincide with the foil and metal pieces of the structure.

As you would expect from a large LEGO kit the details are amazing, from the instrument panels to the NASA spacesuits on the astronauts. Care has been taken with the coloring of the LEGO pieces which includes shiny gold feet and struts and silvery dishes. 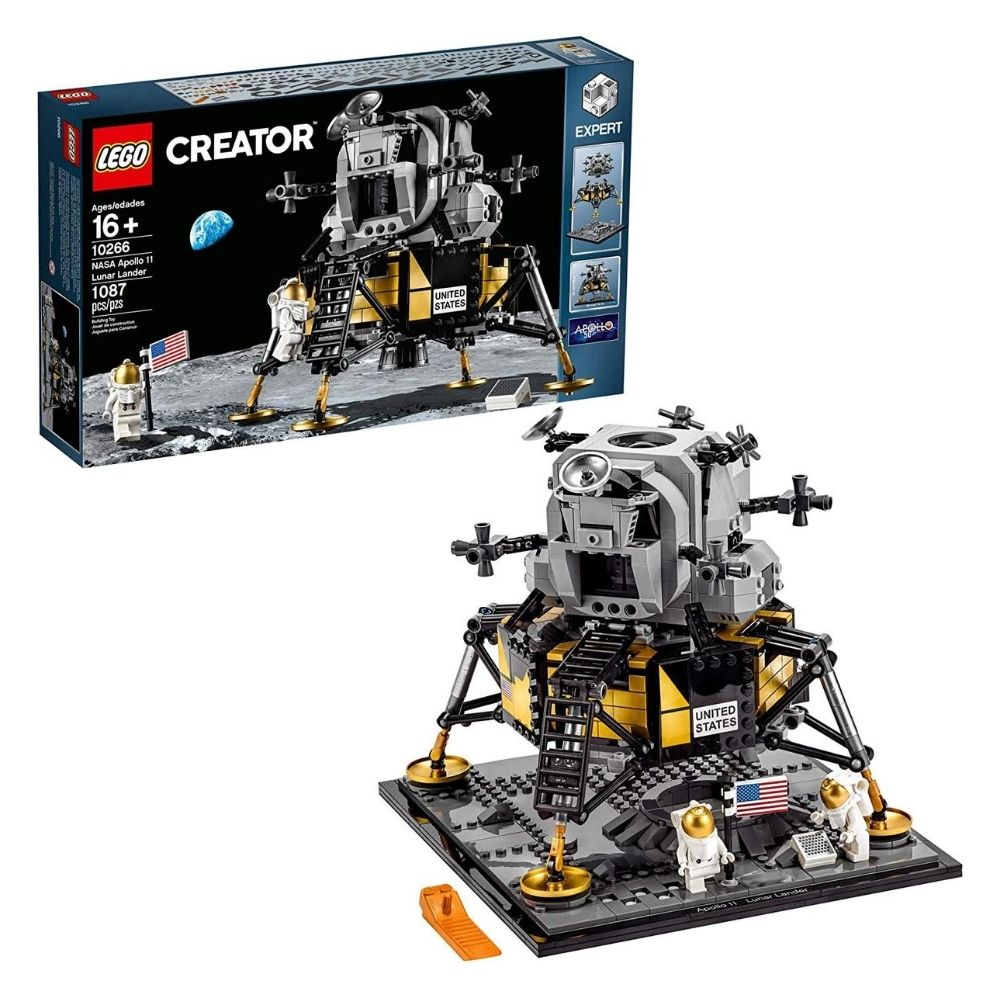 Focus on the astronauts

The set includes two minifigs of male astronauts. Both astronauts look exactly the same from the outside. They have the same very nice and shiny gold helmet. It’s not the same pearl gold that LEGO has been using recently. They have a little hole in the back where you can see the back of their yellow head. The full torso print looks very nice with the NASA logo, and there is a backpack.

One of these characters is Buzz Aldrin, one of them is supposed to be Neil Armstrong although they are not officially named. The only diffentiation between the astronauts is their face.

The 124 page booklet contains 12 pages about the “Race to the Moon” and the Apollo 11 mission. We love how as you build it teaches you interesting facts about the Lunar Lander. The first view pages talk about “The Race to the Moon”, pioneering the “Eagle”, and even talks about the manufacturing of the uniforms worn by the crew of Apollo 11. There is the actual lunar lander that we have in the set, kind of some nice pictures from 1969, world-known sentences like “The eagle has landed”, “One small step for man, one giant leap for mankind”. Then begins the instruction manual.

You will enjoy the added pictures that explain exactly what each feature was for. Incorporate learning into building the LEGO Lunar Lander is a great idea. For example: “The Lunar Lander carried both fuel and an oxidizer to ignite the hyperbolic fuels, since it is not possible to use fuel without an oxidizer in space”.

As usual, LEGO does a great job with instructions. They are all visual, so they work in any language, and they are usually very clear. There are 200+ steps easy to follow. The set requires some LEGO skill and patience but the end result is so worth it, a great reward for hard work.

How to build the LEGO Apollo 11 Lunar Lander

It takes about 4 hours to build. It is not super easy to assemble, as it is an Expert LEGO box. As with most all LEGO sets, the directions are clear and easy to follow so to an adult it is not a problem. A young teen may need help to complete it.

How to display the LEGO Lunar Lander

The lunar lander looks gorgeous as a piece of art in a house or an apartment, big enough to notice and to be a conversation piece. It looks awesome on a desk.

We love the design of Moon beneath the lander. The LEGO lunar lander is removable so you can actually pick the whole thing up and just look at the base of the Moon. It definitely adds to the display and makes it even more special. This is pretty good and accurate representation, or the best you can make in LEGO for the surface of the Moon: dark grey and a little bit of white inside of the craters which is kind of cool. The box art shows the Apollo 11 lunar lander on the Moon but it doesn’t show the actual base that is included. 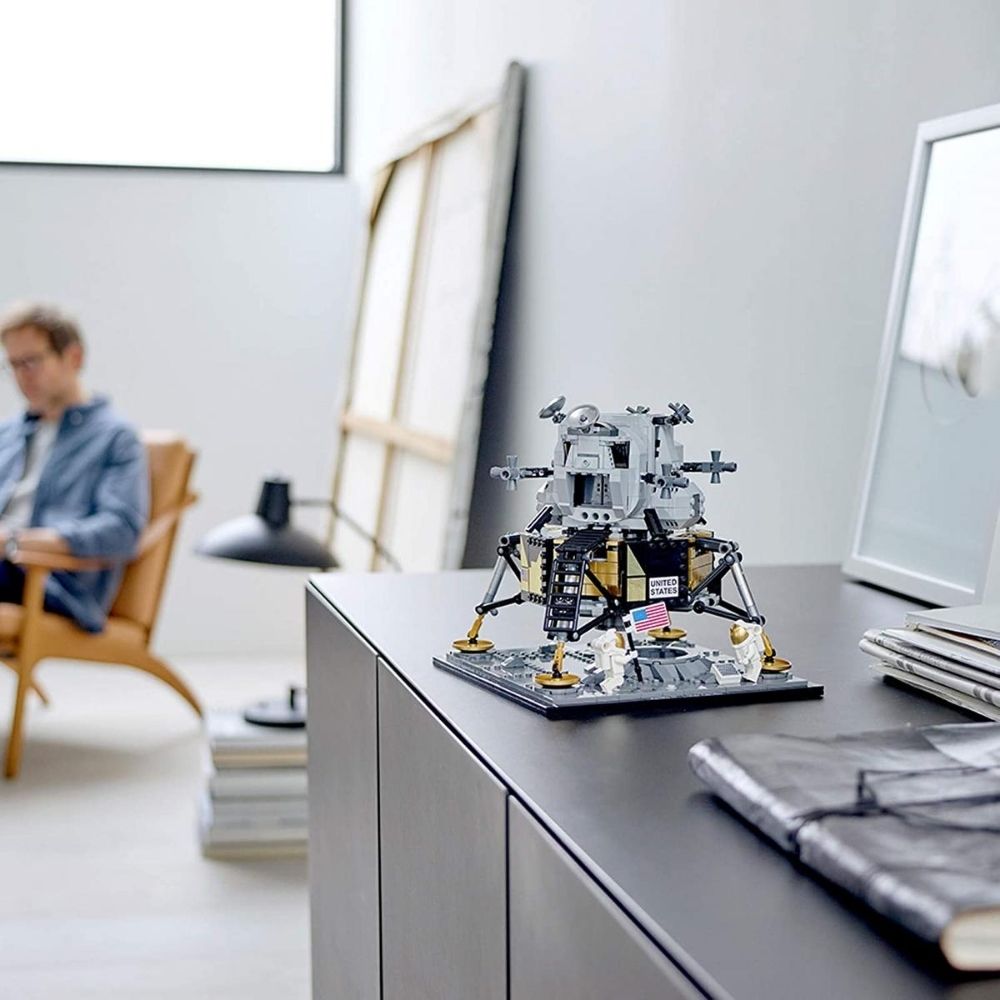 The legs of the lunar lander are on the surface of the Moon, but not attached to it. So it does have the potential of breaking into pieces if you are not cautious during moving the LEGO Apollo 11 lunar lander.

The LEGO Apollo 11 Lunar Lander looks great next to the LEGO Saturn V set. And it would be fun to have some little lights behind it! Also we would love to see if there are extra parts that we can buy to make the moon surface base bigger.

Tip: a basketball display case is the perfect size to compliment the LEGO Apollo 11 Lunar Lander.

What a beautiful and historic model LEGO gives us to enjoy! It has such great details and is awesome as a display piece. It does not even look like LEGO once it is put together.

This set requires a fair amount of concentration and skill. This is one of the most, if not the most, intricate LEGO sets we know. It is incredibly detailed and very different than any of the other LEGO sets we have seen. Don’t watch TV or do other things while building. Some of the pieces are extremely small so if you are clumsy or lack dexterity you may drop pieces so be aware of that

The packaging calls it an “Expert” level assembly, and it suggests for teenagers 16+, which seems about right to us. However, we think younger teens could have a lot of fun with it as a project to do with a parent. And any child that has a lot of experience in building LEGO set should not have any problem even when this set is recommend for age 16+.