All about the TRAPPIST-1 system and news 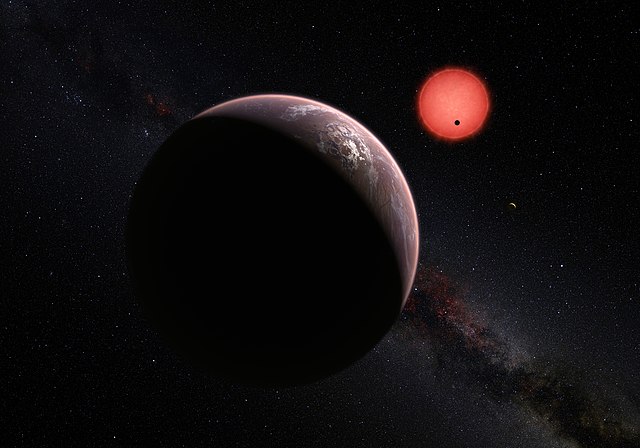 In 2015, we discovered the star TRAPPIST-1 and its 7 exoplanets, located just 39 light-years away from Earth. The dwarf star quickly aroused the interest of researchers of extraterrestrial life. Indeed, these 7 planets all have a size quite similar to the Earth. Three of them are even in the habitable zone of their star. This does not mean that they welcome life but that their surface temperature must be compatible with liquid water, if we do not take into account the effects of atmosphere which is something that we do not have any way . A study published at the end of January suggests that some of the planets in the TRAPPIST-1 system may have much more water than the Earth.

To reach this conclusion, an international team of astronomers tried to determine the density of the planets of TRAPPIST-1, which is difficult and required the use of some of the largest astronomical instruments, ie say the Spitzer space telescope, the Kepler space telescope and the observatory SPECULOOS. By combining the observations of the three telescopes, astronomers have devised a model to determine the density of the planets. For that, we must know at the same time their radius and their mass.

To determine the radius, it was easy because the information was already known. The planets of the TRAPPIST-1 system had been detected by the transits method, which makes it possible precisely to define the radius of the observed planet. To determine their mass, it is more complicated because the planets are very close to their star but also very close to each other, which generates a gravitational dance where everyone influences everyone. It is therefore difficult to determine which mass is at the origin of which disturbance. After a few tries, the international team was able to reproduce a simulation of the planets and their mass, perfectly reproducing the transits observed. Once the density of the planets is known, it is necessary to decide which types of materials can best explain this density.

The study concludes that TRAPPIST-1b and TRAPPIST-1c, the two planets closest to their star, are made of rocky material and have a much denser atmosphere than the Earth, in a way like Venus. TRAPPIST-1d, the third planet starting from their star, has a mass corresponding to one-third the mass of the Earth, and it probably has either a thick atmosphere, an ocean, or an ice mantle. TRAPPIST-1e is the densest of the planets in the system. It is the most similar to the Earth in terms of size, density and radiation received by its star. Many different scenarios could explain its high density, such as a particularly large ferrous core. But it could also have an impressive amount of water. The last three known planets of the TRAPPIST-1 system receive little radiation from their star. These are only deductions from the density of these planets and the radiation they receive, but it is hoped that the planets of the TRAPPIST-1 system will be the target of a campaign of observations by James Webb, the new space telescope that could probably help to refine these deductions.

TRAPPIST-1 is a dwarf star located in the constellation Aquarius. Last February, a team of European astronomers announced the discovery of 7 telluric planets in orbit around TRAPPIST-1. The telluric planets are mainly composed of rocks and metal, like the Earth. Of these 7 planets, 3 could be in the habitable zone of their star. Last month, a team led by Vincent Bourrier from the University of Geneva brought new information on this system.

Thanks to observations made by the Hubble Space Telescope, they were able to analyze the amount of ultraviolet radiation that each of these planets receives. These observations made it possible to highlight the losses of hydrogen from which the atmosphere of these planets suffers. Indeed, ultraviolet rays are at the origin of a process called photo-dissociation during which water molecules break down into hydrogen and oxygen. The lighter hydrogen layers then rise in the highest altitudes of the atmosphere and can escape the gravitational pull of the planet. By observing the hydrogen losses of the planets of TRAPPIST-1, the team of Vincent Bourrier was able to estimate the potential of these planets to shelter water. The planets that are closest to the star seem to be the ones that have suffered the most losses of hydrogen and therefore water.

The scientific team believes that the planets TRAPPIST-1b and TRAPPIST-1c have lost up to 20 times the amount of water on Earth in their history. So it is currently planets sterile and dead because of intense ultraviolet radiation due to the proximity of the star. However, the other planets would have suffered much less from the phenomenon. These results allow us to reconsider the habitability of planetary systems orbiting around red dwarfs, the most numerous stars of our galaxy. It is still unclear whether some of the TRAPPIST-1 planets contain liquid water, but it is interesting to note that in addition to detecting exoplanets, we are beginning to develop indirect techniques to analyze their atmosphere and bring together an increasing number of clues to the conditions prevailing on their surface.

The James Webb Space Telescope will be launched in October 2018 and will make observations in the infrared spectrum. Let’s hope that astronomers around the world will be able to exploit its capabilities to learn more about the exoplanets that surround us, starting with the system of TRAPPIST-1.