All about exomoons and news 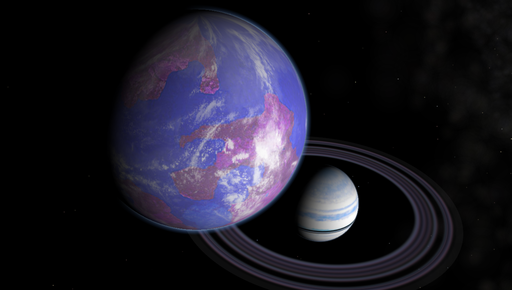 The discovery of the first exomoon is almost confirmed

Since the detection of the first exoplanet almost thirty years ago, we have focused on the observation of other objects orbiting around far stars. We have already discovered clues about the presence of exocometes or protoplanetary disks, but we are still waiting for the confirmation of the first detection of an exomoon. However, observations have been made about Kepler-1625 b. Kepler-1625b is a planet orbiting a yellow star 8000 light-years from the planet Earth. It’s a gas giant, probably a little bigger than Jupiter. It orbits at a great distance from its star, with an orbital period of 287 days, and that is what makes it interesting.

Most models predict that planets orbiting very close to their star can not have a massive moon. But our current detection methods could only detect very large moons, hence the interest of closely monitoring the planets a little further from their star, as Kepler-1625 b. During the summer of 2017, astronomers Alex Teachey and David Kipping announced they had accumulated some clues about the possible presence of an exomoon around this planet, thanks to the Kepler telescope. Their announcement was very cautious because so far all attempts to detect exomoons have been denied following further analysis. Alex Teachey and David Kipping asked to use the Hubble Space Telescope last October. The results of this observation campaign were very interesting.

The study proposes a new analysis of Kepler’s results in addition to those of Hubble. This time, Alex Teachey and David Kipping are much more confident about their findings. They are now 75% sure that Kepler-1625B has a moon the size of Neptune. When a planet passes in front of its star, one detects a weak decrease of brightness of this one. It is the method of transits that allowed the detection of most exoplanets. In the case of Kepler-1625b, they think that an exomoon was observed by Hubble. Kepler-1625b arrived at the rendezvous with 78 minutes in advance, as if the gravity of a huge moon had temporarily accelerated the planet at the end of its transit. The brightness of the parent star then returned to normal in two stages, which could be interpreted as the transit of the planet and its huge moon.

The observations of Kepler and Hubble, however, are not sufficient to be certain that the first exomoon was discovered. Alex Teachey and David Kipping therefore asked to be able to use Hubble again in May 2019, when the next Kepler-1625b transit. If the results of this campaign are once again insufficient, it will be necessary to wait for the James Webb space telescope to be operational.

Confirmation of the discovery of an exomoon such as that which would orbit around Kepler-1625b might call into question some models of creation of moons. It would indeed be too massive to be easily explained. In the meantime, we hope that our tools to observe exoplanets remain operational. Kepler is living its last days and Hubble may have lost one of its last two gyroscopes. We therefore hope that it will remain operational until the entry of the James Webb Space Telescope.

Some moons of Jupiter and Saturn are interesting to explore for the research of life. We think for example of Europa, Enceladus and Titan. These moons are however terribly cold, which is one of the main obstacles to the blossoming of life. In other solar systems, the first exoplanets to have been discovered are so-called hot Jupiter, ie gaseous giants in orbit close to their star. Since, the means of detection have evolved and we are able to detect planets of size and terrestrial mass, which are in the center of all the attentions because it is on the surface of such bodies that one has the most hopes to discover one day the trace of an extraterrestrial life.

Planetary systems discovered over the past 25 years have very diverse configurations and are often very different from our own solar system. Among these different configurations, there are sometimes gas giants in orbit in the habitable zone of their star. A team of American academics even counted 121 gas giants in the Kepler space telescope data. From there, it seems reasonable to think that some of these giant planets have a system of moons, and these exomoons must be very interesting because they probably have a rocky surface and temperatures compatible with the presence of liquid water.

These exomoons probably orbit in large numbers around the same planet, because the cumulative Jupiter and Saturn have 131 moons. But being in the habitable zone of a star is not enough, even when talking about a moon. Our Moon for example is located right in the living area of ​​the sun. Yet it is one of the least active stars of the entire solar system. This is however an additional track that should not be neglected.

Before you can speculate on the habitability of exomoons, you must already be able to detect them. But it is impossible to use the method of radial velocities on the parent stars because the method does not make it possible to know if the detected object is a planet alone or accompanied by its moons. The transit method could be more interesting but to arrive at a convincing result we need much more powerful instruments than those currently available to us. Last summer, a team from Columbia University announced the first detection of an exomoon with this method. This exomoon is the size of Neptune orbiting a planet the size of Jupiter. It is therefore rather a double planet.

Can exomoons welcome life ? This question should remain unanswered for a very long time. Part of the answer is probably in our own solar system. One can for example wonder what would become Titan or Enceladus if Saturn orbited instead of the Earth. Would the two exomoons gain in temperature be offset by higher radiation? What would their compositions be if they were created in this part of the protoplanetary disk ?

A team of astronomers think to have detected an exomoon

We have known the existence of exoplanets for more than two decades now. Thousands of exoplanets have been indexed. But astronomers now want to be the first to detect another body outside our solar system, an exomoon. So far, the search for the first exomoon has been a series of disappointments. It is already difficult to detect an exoplanet, so to detect a small body orbiting a planet that can not be seen is very difficult. That’s why Professor David Kipping’s team at Columbia University is very cautious.

A very serious candidate called Kepler-1625b I is 4000 light light-years from Earth. Professor Kipping’s team requested observations with the Hubble Telescope. They wish to verify the existence of this exomoon definitively. As often, it is the largest objects that are detected first. The exomoon would have the size of Neptune, which is very different from the moons that we know in the solar system. It orbits around a planet the size of Jupiter. For the moment, David Kipping has published the result of his research. In order to allow other astronomers to compare their results to their own observations, observations will be made using Hubble, which will help to know if Kepler is an exomoon. The exoastronomy promises great discoveries in the years to come, starting with the announcement of the discovery of a true exoterre.