All about Transneptunian objects and news 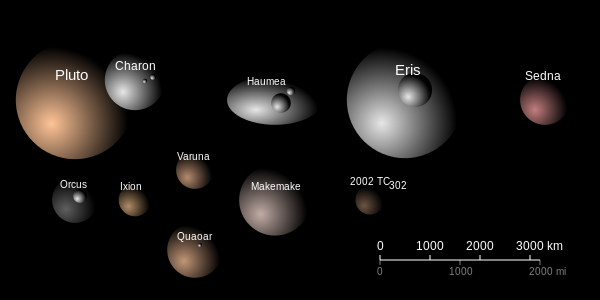 Astronomers discover a new Transneptunian object which orbit is strange

The Kuiper belt is a disk of objects in orbit around the sun. Beyond Neptune, some of these objects have a very elliptical orbit and are difficult to explain. This is for example the case of the dwarf planet Sedna. Their long elongated orbit suggests that these objects have been disturbed by the gravitational field of a massive object during their history. But even at the lowest point in their orbit, they are going too far from Neptune to make this planet responsible. This is what drives part of the community of astronomers to look for a possible ninth planet, a massive planet that could explain the disturbances of certain objects of the Kuiper belt.

A new object that also has a very elliptical orbit far beyond Neptune was discovered by a team of American astronomers using the Subaru telescope. 2015 TG387 is a Transneptunian object that could be a candidate for dwarf planet status. Its diameter is estimated at about 300 km, but it is its orbit that makes it particularly interesting. The lowest point of its orbit places it at 65 astronomical units of the sun, nearly twice as far from our star as Neptune, the last official planet of the solar system. It goes to more than 2000 astronomical units of the sun, which represents 3% of a light year. It takes about 34000 years to 2015 TG387 to go around the sun. This colossal distance suggests that it may be an object of the internal Oort cloud. It could be precipitated towards the interior of the solar system following its meeting with a very massive object.

There is probably a large amount of similar objects that are too far away to be detected with our current means. The hypothesis of a ninth planet, however, divides the community of astronomers. We can actually explain the orbits of Sedna, 2015 TG387 and some other objects if we imagine that a planet of almost 10 Earth masses is in orbit around the sun. It should then be between 200 and 1000 astronomical units of distance, which would make it very difficult to detect with the telescope. But apart from some simulations, there is not really any proof of its existence.

Other phenomena could explain the long elongated orbits of certain transneptunian objects : another star passing nearby during the long life of the sun, or perhaps the important gravitational interactions in the group of stars that gave birth to our Sun. We could learn more by discovering new objects similar to 2015 TG387. The solar system beyond Neptune still has many mysteries, and the commissioning of new telescopes could help us break through some of these mysteries.

A Planet 10 beyond Neptune ?

Transneptunian objects are beyond the orbit of Neptune. Pluto, for example, is a Transneptunian object. We realized in the early 2000s that our solar system has a large population of dwarf planets in its distant orbits. They are called Orcus, Sedna or Makemake, and are of a size comparable to Pluto. Some of these objects are far apart: Iris is three times farther from the sun than Pluto, the dwarf planet furthest from the sun, far beyond the Kuiper belt.

Researchers in astronomy at the University of Arizona have conducted research on the gravitational disturbances of the Kuiper Belt. Their findings suggest that a planet of size between Mars and Earth could orbit twice the distance between the sun and Neptune. It has for the moment been called Planet 10. Since the discovery of Neptune in 1846, there are many attempts to try to identify a possible ninth planet. Pluto had this name for a very long time before being dismissed when it became clear that it was just a dwarf planet among many others. We have long talked about a hypothetical planet 9 with a mass up to ten times that of the Earth and which would explain the gravitational perturbations observed on transneptunian objects, but this hypothesis could not be validated or invalidated at this time.

The detection of Transneptunian objects is indeed very difficult because the methods of detection are all indirect : Neptune itself had been discovered thanks to the gravitational perturbations which it caused on the orbit of Uranus. It is the same method that continues today, that is to say we observe the trajectories of known objects and we explain their incoherence by the presence of an object whose mass and orbit can be determined. This method pushes us today to have very strong suspicions about the existence of a ninth and tenth planet that still remains to be observed.

For the physicist and mathematician Freeman Dyson, Transneptunian objects are an ultimate goal for spatial colonization. They would indeed be very rich in deuterium and helium 3, which would make it real service stations for a nuclear-powered spacecraft that would embark on an interstellar journey.