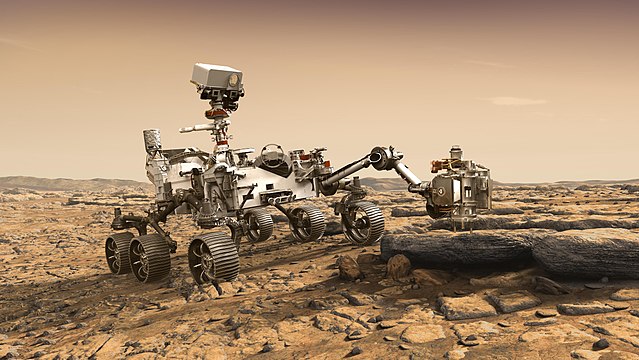 The drone has been integrated into the Mars 2020 mission rover

With less than a year to go until the next launch window towards the planet Mars, the preparation for the March 2020 mission is progressing fast. As a reminder, this is a rover that largely incorporates the architecture of the Curiosity rover. Its mission is distinguished by the fact that the rover will collect samples that should normally be collected within ten years and brought back to Earth. Another peculiarity, the mission also embarks a drone, the first object heavier than air that will fly in a different atmosphere than that of the Earth.

This drone and its launching platform were integrated into the rover a few weeks ago after having passed numerous tests. It is now safe under a plate placed under the belly of the March 2020 rover. This should allow it to survive the retrofusal landing. Once the Mars 2020 mission lands on Mars, NASA will take its time to find an ideal test site.

The scientific mission of this helicopter does is not a big challenge, it is above all a demonstrator of technology. If this first drone works well, the US space agency could add one to all its missions to the planet Mars, with more and more ambitious scientific objectives.

But to make a 1.8 kg machine fly in an extremely thin and dusty atmosphere is a risky bet. The team in charge of the helicopter admits itself that it is a high-risk mission. Maybe the technical choices (counter-rotating blades, solar energy and mass reduced to the extreme) are not good. The best way to find out is to test this in real conditions. The March 2020 journey towards the planet Mars will begin in the summer of 2020, and the first flight of the drone will likely take place the following year.

2020 will be an important year for Martian exploration. Three missions will be launched to the planet Mars this year, including the Mars 2020 mission, an American rover built on the same basis as the Curiosity rover and which should collect samples to be sent to Earth by another mission ten years after. Mars 2020 will also explore the planet Mars for traces of water from the past, and perhaps even some biological traces. The Mars 2020 mission will explore a crater that may have hosted for a relatively long time a lake and a river delta, perhaps long enough for life to emerge.

March 2020 will explore this environment with a companion. A year ago, we learned that the US Space Agency adds to the Mars 2020 mission a tiny helicopter powered by solar energy. This helicopter named Mars Helicopter Scout will make flights of a few minutes in recognition of the ground. It would be the first time that a craft heavier than air will fly out of the Earth. Its first flights will have to face a series of constraints. Firstly, the gravity is less strong on the planet Mars, and it has also to adapt to a much thiner atmosphere than the Earth’s one.

Controlling the helicopter will be a real challenge because communications take a few minutes to go back and forth between Mars and the Earth. The helicopter must therefore be capable of great autonomy. Very light, it will not embark any scientific instrument except a high-resolution color camera that will send beautiful images of the surface of the planet Mars. The small helicopter of the Mars 2020 mission has just passed a series of tests. In January, he flew into a simulated Martian atmosphere. Last month, he underwent vibration tests and extreme temperatures. Despite its mass of just 2 kg, the little explorer seems to survive all the constraints.

This first helicopter is primarily a demonstrator of technology. If its track record on the planet Mars is positive, NASA could go further. The planet Mars is a planet traversed by many reliefs. For example, it has the highest mountain in the solar system. Its cliffs are not always accessible with rovers. These are however ideal targets for a radio controlled helicopter. The integration of such devices in future missions could therefore become the norm.

Mars Helicopter Scout will continue testing until this summer. It will then be integrated into the Mars 2020 rover pending its launch. By then, NASA could go even further. We know that NASA has a drone project for Titan, the largest moon of Saturn. It would be an atmosphere in which we would have to learn to fly in a different way. This project is however in competition with another to become the fourth mission of NASA’s New Frontiers program. The decision should be made later in the year.

NASA plans to add a helicopter to Mars 2020 mission

Last Saturday, the Insight mission flew to Mars aboard an Atlas 5 rocket. Everything seems to have gone as planned and we will now have to wait for under seven months until the lander. NASA is not wasting time : it is currently preparing the next martian mission, a Rover called Mars 2020.

With Mars 2020, NASA will continue to exploit platforms that have proven themselves on the red planet. Insight takes over the architecture of the Phoenix mission and the Mars 2020 Rover will take over the architecture of the Curiosity mission. Mars 2020 will weigh almost a ton. NASA will give its final approval to assembly the Rover at the end of May. One of the last decisions to be made is the subject of much debate : whether or not to add a helicopter to the mission ?

The helicopter is already prototyped for a few years. He even done flight tests in an environment that reproduces Martian conditions. It is an independent JPL project but has been thought from the beginning to be able to be grafted to a Rover. The Mars 2020 helicopter however has some opponents within the US space administration. He is accused of increasing the risks of the mission while making a minimal scientific contribution.

It is above all a demonstrator that serves as proof of concept for future missions. As currently planned, the martian helicopter would be active during the first 30 days of the mission only. The first 30 days of the Rover will also be crucial and some teams would prefer to spend all their time looking after Mars 2020 rather than doing flight tests in the Martian atmosphere.

The size of its rotors and its feather weight will allow it to rise in the fine martian atmosphere up to 400 meters in height. It will only ship a small battery recharged by photovoltaic cells and able to provide three minutes of flight per day. Its payload will be a high resolution camera and a communication system.

With the Rover, the only mission of the helicopter will be to make reconnaissance for Mars 2020. Its high resolution camera should provide images ten times more detailed than the satellites currently orbiting Mars, ideal for selecting the most promising sites for the Rover. By the launch date, Nasa still has to identify the landing site and to solve some technical problems such as the fractures that were discovered on the heat shield that should allow the return to the Martian atmosphere.

In 2020, three rovers will arrive on the planet Mars : a Chinese rover, a European rover and an American rover. NASA has just started building the American rover. NASA is largely recovering from the Curiosity rover platform that is on the planet Mars since summer 2012. The Mars 2020 rover exploration mission was created for the long-term : the Mars 2020 rover is responsible for collecting samples that the NASA hopes to return to Earth between five years and ten years later. Thus, a large part of the payload of the rocket that will carry the rover will be dedicated to the collection and storage of samples for the mission back to Earth.

But the Mars 2020 rover, which will still weigh more than a ton, will benefit from more powerful instruments and a mission different from Curiosity. In the past, Curiosity has been tasked to determine the livability of the planet Mars while Mars 2020 will go directly in search of traces of fossil life. These would probably be very old. It is likely that the planet Mars hosted liquid water in abundance around 3.7 billion years ago. If these conditions have allowed the emergence of life, perhaps the rover will arrive to find a fossil. But the hospitable conditions of the planet Mars have lasted very little time on the scale of evolution : certainly a few hundred millions of years. At best, Mars 2020 will find microbes or bacteria.

To fulfill its mission, the Mars 2020 rover will carry out on-site analysis. Some of the Mars 2020 instruments will be much more powerful than those of Curiosity. The rover could thus detect a microscopic extraterrestrial. NASA has also equipped the rover with instruments that will enable it to determine the most promising samples for return and analysis on Earth. Radars and cameras should help Mars 2020 to drill the most interesting layers of the red planet. The mission to bring the samples back to Earth has not yet been budgeted, and it is not sure that the US Congress agrees.