All about the LISA and LISA Pathfinder missions and news 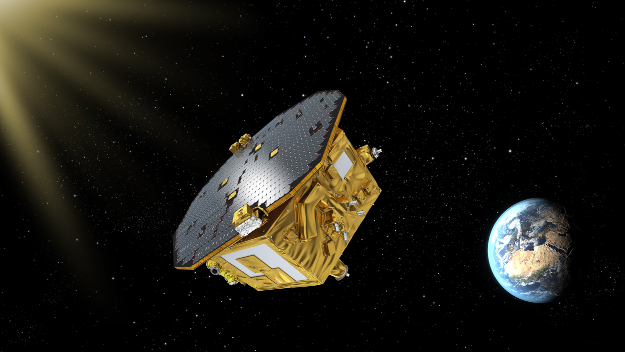 Gravitational waves are predictions derived from general relativity. They appear under certain circumstances when very massive objects move at high speed. For astrophysicists, the confirmation of the existence of these gravitational waves has opened a new field of observation : it is indeed possible to use them to obtain information that would be impossible to obtain through telescopes or traditional radio telescopes.

ESA has launched the LISA program, which will launch three satellites flying in formation, and distant from each other by one million kilometers. They will have to measure minute variations in the distance between them. These variations will be the sign that a gravitational wave has just crossed them. By studying these variations, we can determine what kind of event caused it, how far and in what general direction.

LISA Pathfinder is the technological demonstrator that will validate all the technologies that will be used for the LISA project. This mission has just ended last tuesday. Indeed, to detect minute variations in the curvature of space-time generated by the passage of a gravitational wave, LISA will have to resort to advanced technologies. Launched in December 2015, LISA Pathfinder spent a year and a half in the space testing ultra-precise lasers and micro-propellers. All will be necessary to connect the three satellites of the mission by lasers : it is indeed necessary to isolate them to the maximum of external disturbances to ensure that in the detected interference there are gravitational waves. LISA Pathfinder has been a great success : ESA scientists must now design the LISA mission. However, space projects are still progressing very slowly and it will be until the 2030s before the three satellites start their mission.

LISA could help to know more about supermassive black holes such as the one at the center of our milky way for example. LISA should be able to capture events over very long distances. This first space observatory in gravitational waves will be the beginning of a new era for astronomy.