All about the mission CUVE to Venus and news 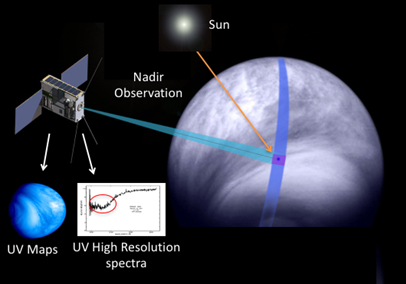 Although Venus is close to the Earth geographically and in terms of its characteristics, Venus is not at all as popular as Mars, no doubt because of its monstrous atmosphere. NASA has just selected the CUVE mission to solve a mystery of Venus that has been challenging astrophysicists for several decades. In visible light, the planet looks like a uniform white ball. The thick atmosphere of the planet hides all the details of its surface. But in ultraviolet light, Venus changes completely. It reveals bands that astronomers have difficulty to explain.

The CUVE mission which will be interested in the atmosphere of Venus is remarkable because it is a CubeSat who is in charge of the mission. CubeSats are tiny satellites of a few tens of centimeters. They take advantage of the progress of miniaturization to greatly reduce costs. It is indeed possible to launch several tens of them with a single rocket. The possible applications are very numerous and it is estimated that more than 6000 of these mini-satellites will be launched over the next ten years. CubeSats are not just for commercial applications, and NASA intends to use them for planetary exploration.

The CUVE mission to Venus will be the first of its kind, but other missions should follow quickly. The US Space Agency opened in March the PSDS3 program to select ten scientific missions feasible with CubeSats for the Earth, Venus, Mars or nearby asteroids. We are witnessing a new era of low-cost robotic exploration. The advantage of CubeSats is that they do not require dedicated launchers. Their size and reduced weight allow them to be embedded in the payload of other missions, this is in any case what is planned for CUVE.

To achieve its mission, the mini-satellite will use a miniature ultra-violet camera and a spectrometer, also made possible by the progress of miniaturization and nanotechnology. The mirror of the telescope of CUVE for example will be made of carbon nanotubes, which has a dual advantage : reduced weight and easy manufacturing. This type of mirror does indeed require no polishing.