All about the Dragonfly mission on Titan and news 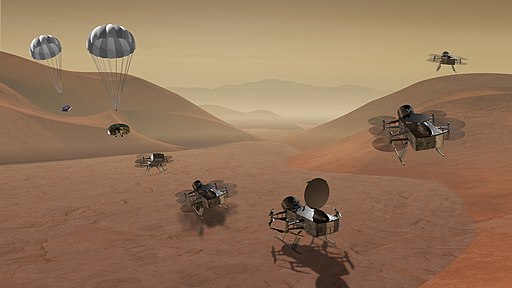 The Dragonfly mission will fly towards Titan in 2026

It was one of the most anticipated decisions in 2019. The US Space Agency had to choose between two candidates for the fourth mission of the New Frontiers program. NASA can only fund one of them. The first mission proposed to collect samples of 67P / Churyumov-Guerassimenko, the comet that had been visited by Rosetta and Philae. The second mission aims to explore Titan, a moon of Saturn, thanks to a propeller drone. This mission, called Dragonfly, was finally selected on June 27, 2019. It is a very ambitious choice. In the entire solar system, only two moons were visited by a lander : the moon of course and Titan, which had been quickly explored by the European Huygens lander, which had been transported by the Cassini spacecraft.

Titan is one of the most exciting celestial bodies in the entire solar system. Despite its distance and intense cold, the moon of Saturn has a thick atmosphere. Like on Earth, Titan’s atmosphere is mostly composed of molecular nitrogen. The atmospheric pressure is a little higher than on the planet Earth, about 1.5 bar on the surface. The gravity on the surface of Titan is much lower than the gravity on Earth. It should therefore be quite simple to fly a drone. Titan is exceptional because it is the only other body in the solar system to have liquids on its surface. The poles of the moon of Saturn are traversed by lakes and seas of methane fed by seasonal rains. It remains to be determined to what extent these liquids could accommodate the elementary bricks of life.

Dragonfly, the new mission of NASA’s New Frontiers program, has to answer this question. The Dragonfly mission will take off in 2026 and reach Titan in 2034. The US Space Agency hopes to fly a drone on Titan for more than two years, which would cover nearly 200 kilometers in Titan’s atmosphere. The drone of the Dragonfly mission is a quadcopter equipped with 8 propellers spread over four axes. As it is very dark on Titan, the drone will draw its energy from a RTG, a small nuclear battery capable of providing low power for decades.

The drone of the Dragonfly mission will make bigger and bigger leaps until flying over distances of more than 8 kilometers at the end of the mission. It will land in the area called Shangri-La, a dark area that may host a dry ocean. Then the drone will travel to the crater Selk, which may once have received liquid water. To fulfill its mission, Dragonfly will embark a camera, two spectrometers and a weather station.

The Dragonfly mission aims to explore Titan with a drone

NASA continues to roll out its solar system exploration program, called New Frontiers. The New Horizons, Juno and OSIRIS-REx space probes have already been launched. They are interested in Pluto, Jupiter and an asteroid. NASA is currently closing the selection of the fourth mission of the program. There are only two candidates left : the first is a sample return mission, from the comet 67P/Churyumov-Gerasimenko supported by Cornell University. The second mission has an incredible ambition from a scientific and a technical point of view. This mission is called Dragonfly. It aims to study Titan, the largest moon of Saturn.

Titan is a particularly interesting target. With its dense atmosphere, it is the only body in the solar system outside the Earth that has liquid matter in stable form. It is not water but methane. With its featureless seasons and its methane cycle, Titan offers all the necessary conditions for the emergence of complex organic chemistry. We can therefore think that life was able to develop in this environment rich in opportunities. The Dragonfly mission has the ambition to study this possibility using a drone. One of the advantages of a rich atmosphere is that it is possible to make objects fly.

Dragonfly would be a quadricopter with double rotors, weighing half a ton. It would embark a RTG for its energy needs, which would probably make it the first nuclear quadrocopter. Its mission on the surface and in the air of Titan would spread over two terrestrial years. The purpose of the spacecraft would be to study Titan’s chemistry to determine the progress of prebiotic chemistry. The Cassini mass spectrometer has already been able to detect some complex organic compounds in the atmosphere of the moon of Saturn, so Dragonfly’s mission would be to continue this detection, and perhaps identify some fundamental compounds of life.

To carry out these analyzes, the space probe would be equipped with two spectrometers, a weather station and a set of photo sensors. It would be able to fly from site to site and thus multiply the chances of making an interesting discovery. In appearance, it may seem a little crazy to send a drone as far away from the Earth. The conditions of Titan are adequate thanks to its atmosphere 50% denser than that of the Earth and thanks to its low gravity. Flying a drone on Titan consumes 38 times less energy than on Earth. It will be necessary to wait until 2019 for NASA to announce which mission it has selected. If Dragonfly is chosen, its launch will take place in 2024.