Long March 5 (Chang Zheng-5) : all you need to know and news 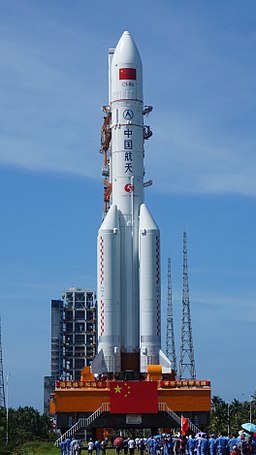 Still no date for a second launch of Long March 5

China has an ambitious lunar program. In recent years, the Chinese Space Agency has implemented an impressive robotic program. But like everyone else, China is facing failures. Last Thursday, a Long March 4C rocket and its payload were lost. There was an anomaly on the third stage of the rocket. A similar incident had already occurred in 2016. The Long March 4C is a light launcher capable of placing a little over 4 tons in low orbit. But it is also involved in the Chinese Moon exploration program. A year ago, this rocket propelled a relay satellite placed at the L2 Lagrange point of the Earth-Moon system. Since then, the rocket had not flown, and it will probably not fly for a long time.

Long March 5 failed in July 2017 during its second flight. Since then, it has not flown. It was expected to return in October 2018 and then in April 2019, but the CNSA preferred to postpone the return date. Currently, we do not know when the Long March 5 will fly again. In these conditions, we wonder if the Chang’e 5 mission is still possible at the end of the year. It is a lunar sample return mission, a world first since 1976. It will allow China to validate all the technologies needed for an crewed lunar travel.

The two years without flight of the Long March 5 show that the Chinese heavy launcher has undergone significant changes. The 2017 incident was due to a failed engine located in the first stage. It seems that the CALT engineers, the public company that makes this engine, needs more time than expected to find a solution to this problem. If China’s public sector is failing, Chinese space startups are always ready, such as iSpace, which will soon try for the first time to put a satellite in orbit.