All about the Opportunity rover on Mars and news 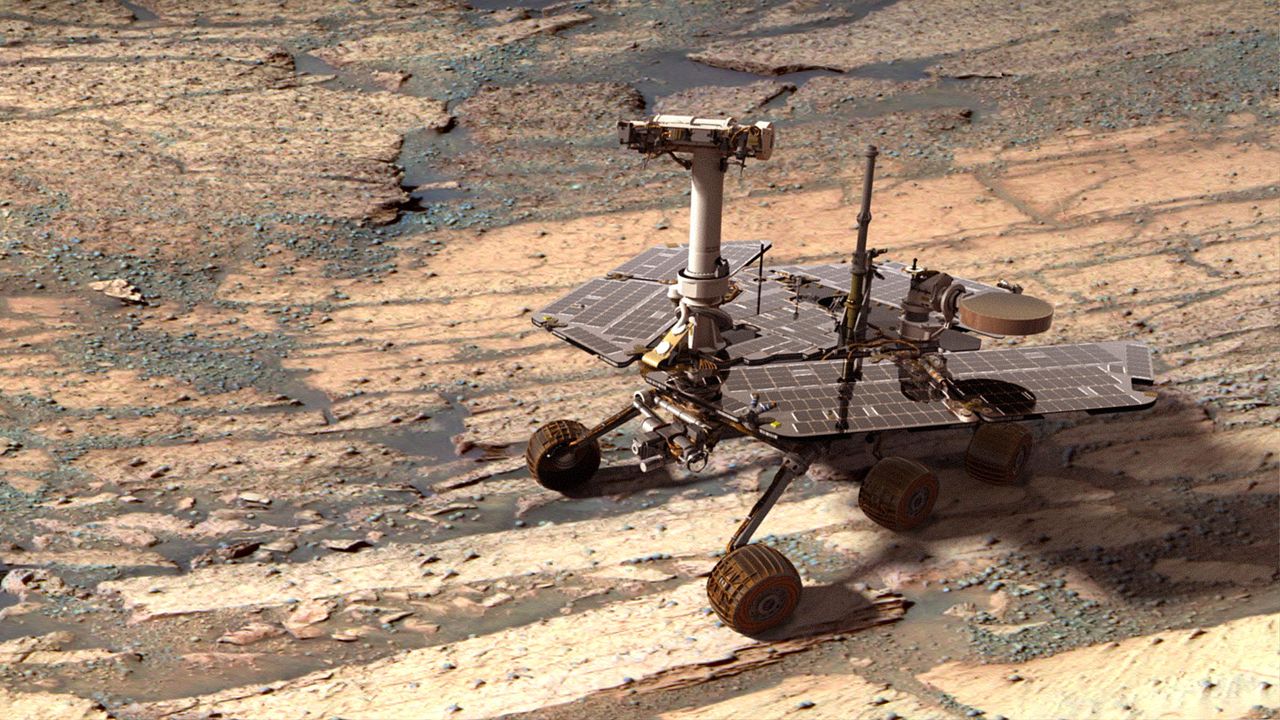 After 15 years on the planet Mars, the rover Opportunity was finally declared dead on February 13, 2019. In fact, the rover no longer sent any sign of life to NASA since many months. But NASA wanted to give it a chance to resume communications. But listening to a rover who does not speak is expensive. After a while, you have to redirect resources to more productive missions.

The rover Opportunity has fulfilled its mission beyond the expectations of its designers. It traveled the planet Mars 60 times longer than expected, which allowed it to travel a little more than 45 kilometers on the surface of the planet Mars. It helped prove that in the past there was liquid on the surface of the red planet. In some places that Opportunity has visited, the rover has collected clues about the past presence of water at neutral pH that would have been potentially life-friendly 4 billion years ago. The rover Opportunity was able to observe dunes of ancient hydrothermal systems and dust whirlwinds formed by the Martian winds.

The dust finally killed the Opportunity rover. So there is now only one active rover on Mars, Curiosity. But other rovers will come in the early 2020s. Maybe one of them will break Opportunity’s record of endurance.

This is probably the end for the Opportunity rover

The Opportunity rover is most likely unrecoverable. After 14 years of mission, NASA is about to end its rescue operation. A monstrous Martian dust storm had ensanded the solar panels of the rover Opportunity early last summer. After more than a month of trying to restore communication, the Opportunity rover still does not respond. But NASA needs to mobilize its communications resources to Mars for the landing of the InSight mission. In one or two weeks, the US Space Agency will therefore stop active communications with the rover Opportunity. NASA will still listen passively for a few more months, in case the rover manages to reconnect on its own initiative.

The Opportunity mission was to last 3 months, but it’s been 14 years since the rover explored the planet Mars. This exceptional life allowed it to travel 45 kilometers on the surface of the red planet. The rover Opportunity and its twin rover Spirit have helped a lot in understanding the planet Mars and have been heavily involved in the assumption that there is water on Mars. In 14 years, the rover Opportunity has also found itself in difficult situations, but it has always been able to survive.

The year after its arrival, for example, the little rover got stuck in sand dunes. JPL engineers took six weeks to resolve this situation. But one of the big threats that Opportunity has to face is the sand on its solar panels. They provide all the energy needed for its operation. Martian winds often carry dust with them. The energy generated by Opportunity’s solar panels has therefore changed a lot in 14 years. Luckily, in 2016 well-placed winds almost completely cleaned the solar panels, which gave a lot of energy to the little explorer.

But luck does not last. Since the beginning of the month, a gigantic sandstorm is taking shape in the atmosphere of Mars. It risks putting the Opportunity rover in a very delicate situation. A few days ago, Curiosity another rover located thousands of miles away, took a picture showing a completely obscured horizon. The Curiosity rover is not too worried because its power supply is from a nuclear source. But for the rover Opportunity, this storm presents a real risk. In 14 years, the rover has experienced several Martian dust storms, but never anything of this magnitude.

The first problem concerns the storm itself. The heavens above the Opportunity rover are loaded with dust and leave very little light filtered. The rover is in the dark, and when you rely on solar panels it’s never good news. At the beginning of the month, Opportunity’s solar panels generated nearly 650 watts / hour per day. For the day of June 10, while the rover was in a storm, its solar panels fell to a performance of 22 watts / hour. To try to survive, the rover Opportunity has put itself in a mode of extreme energy saving. All its functions are off except its internal clock.

The only thing to do for the moment is to wait. If in the coming days or weeks the rover gets enough energy from its solar panels to recharge its batteries, it will attempt a communication with the Earth. NASA will then be able to face its second problem. It will be time to evaluate how many sand there is on the solar panels of the rover, which is a decisive factor to know the follow-up to be given to the mission. If the storm persists and Opportunity is unable to accumulate enough energy, it could even lose its internal clock. It would then be unable to communicate at a fixed time with the Earth. Recovery efforts would become much more complicated. Even worse, it could freeze on the spot, which would mean the end of the mission. That’s exactly what happened in 2010 to its twin, the Spirit rover.

But Opportunity is lucky because the Martian summer is coming. The temperatures that the rover will have to face should not go below minus 36 degrees Celsius. It is currently impossible to know how long the storm will last. NASA is quite optimistic about the chances of survival of the rover Opportunity, so we hope that it will be able to celebrate its fifteenth anniversary on the surface of Mars.

The Martian rover Opportunity has multiplied its lifetime by 50 !

The Opportunity rover has been in business for over 13 years. It has just sent pictures of the Valley of Perseverance that is suspected to have been dug by water flows. The rover is currently parked at the top of the valley and will go down next month.

The Opportunity mission is simply incredible : the rover was originally designed for a 3-month mission. It has therefore increased its lifetime by more than 50. This allowed it to travel 45 km on the surface of Mars and therefore to visit many craters and sites of interest. The Opportunity rover has been able to collect many clues favorable to the presence of liquid water on Mars in the past. It is impossible to say today when the Opportunity rover will stop, however it demonstrates that the martian environment is less hostile than the other planets of the solar system.