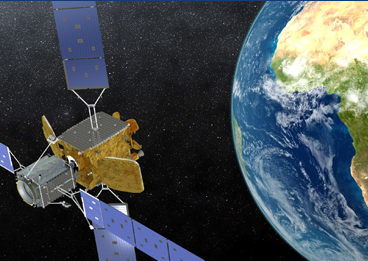 At the Satellite 2018 conference, the US company Orbital ATK presented its plans to rescue end-of-life satellites for a fee. Orbital ATK and its subsidiary Space Logistics already sells the Mission Extension Vehicle (MEV), a space tug that mounts to satellites in geostationary orbit that no longer have enough fuel. It allows them to continue their mission thanks to its own propulsion system. The MEV can also be used to modify their orbit or place them in a parking orbit.

The MEV will conduct its first mission next year to serve the Intel Sat satellite fleet as part of a demonstration mission. It will move the Intelsat 901 telecommunications satellite into a parking orbit. But Orbital ATK hopes to sell only one MEV per year over the next five years, which is obviously not enough to clean the geostationary orbit.

This is why Orbital ATK is also developing new vehicles, called MRV (Mission Robotic Vehicle). The MRV will be a spacecraft taking over the architecture of the MEV. It will embark with him a dozen modules, the MEP (Mission Extension Pods). With the help of a robotic arm, the MRV will fix one of these modules on a satellite. The MEP modules will then be able to maintain the orbit of the satellite over a period of up to five years. Only one MRV will be able to extend the life of twelve satellites. This new system should be available by 2021.

Thanks to its robotic arm, the MRV should also be capable of missions going beyond the prolongation of life. It will be able to carry out inspections of the satellites that approach it and possibly carry out repairs. Finally, Orbital ATK should offer its customers the installation of modules to increase the performance of their satellites.

Even if this service should arrive later in the development of the concept, the modules and space tugs proposed by Orbital ATK are not the only ones on this niche. The company Effective Space Solutions works on a very similar system. Space Systems Loral (SSL) is also working on a refueling and repair spacecraft concept for DARPA. Space logistics seems to become a real area of ​​expertise.