WFIRST will use the gravitational microlensing method 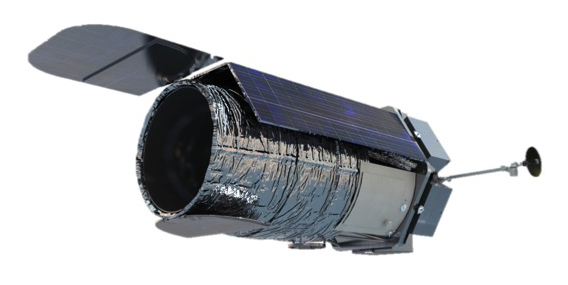 The gravitational lens effect was predicted by Albert Einstein in 1936. When two massive objects, for example two stars, are perfectly aligned with an observer, the object in the middle, called the lens, will act as a magnifying glass on the light emitted by the farthest, called the source. The star that serves as a lens may have a planetary system, in which case each of these planets will leave its mark on the observed magnifying effect.

This technique is fairly recent, it generated discoveries for the last decade. Twenty or so exoplanets were detected thanks to this method during this period, which is not a lot. The main interest of this method is that it allows to discover small planets the size of the Earth or the planet Mars, orbiting far enough from their star. For example, it detected a super-Earth with a 10-year orbital period. Detections of exoplanets are quite random and are due to luck. They are not reproducible because you need alignments that only happen once.

The WFIRST space telescope will monitor a large number of stars to significantly increase exoplanet detections. This should give us a good idea of ​​what a typical planetary system looks like. This will be the opportunity to know if the orbital situation of the Earth is frequent or not in the galaxy. The majority of exoplanets detected to date have been through the transits method or the radial velocity method, but these methods favor the detection of large and massive exoplanets orbiting near their star. This bias can distort our perception of what constitutes the norm and the exception in the universe. With its census based on gravitational microlensing, the WFIRST space telescope should improve our understanding of planetary systems.

WFIRST space telescope is included in the 2020 NASA’s budget

Over the next decade, NASA wants to send to space new large space observatories. James Webb, a giant telescope equipped with a 6.5-meter primary mirror, and WFIRST. WFIRST was made possible by a donation from NRO, the agency that deals with US spy satellites, to NASA. The agency will offer two telescopes of similar capacity to Hubble, but with a much larger field of observation. It is on one of these telescopes that WFIRST was built.

The mission was initially thought of as an observatory to try to better understand the nature of dark energy, and this remains one of its main missions. But as it developed, the US Space Agency wanted to make WFIRST a leading tool for direct imaging of exoplanets. This new capacity involves the addition of a very powerful coronograph, that is to say a complex system of masks, prisms and distorting mirrors.

Its purpose is to block the light of a star while letting those of the orbiting planets pass through, an extremely difficult exercise since in an optical system the light collected forms diffraction patterns that prevent the immediate outlines of a light from being discerned. The installation of this coronograph has therefore significantly inflated the cost of the mission, so that for two years or so WFIRST is at the heart of a budget battle. Not easy indeed to find money while NASA tries to return to the Moon.

The first good news is that WFIRST has managed to have budget in the 2020 US Space Agency’s budget. It obtained a $ 445 million envelope that will allow it to continue its development. The second good news is that its elaborate coronograph has just completed its preliminary design review. This means that its final architecture is now determined and that we can move on to the manufacturing phase of the space telescope.

If the telescope successfully fulfills its mission, NASA plans to build even more powerful coronographs to place them on even larger space telescopes. This is what should eventually make it possible to image planets the size of the Earth. At this distance, when we speak of images, we speak of a pixel, which would not be bad because a pixel is already sufficient to have a light spectrum and thus potentially to obtain information on the atmospheric composition of the observed exoplanet.

Before reaching this point, WFIRST will continue its development to be launched in the mid-2020s. Like the James Webb space telescope, it will be located at the L2 Lagrange point of the Sun-Earth system. Its mission will last for at least five years. In addition to studying the expansion of the universe and testing its coronograph, WFIRST will try to detect many exoplanets by the gravitational micro-lens method. Failing to directly image an exo-earth, it should at least help extend the list of candidates.

The mobilization of the scientific community saves the WFIRST space observatory

WFIRST has to fight each year so that its budget line does not disappear in the budget of the American space agency. This observatory is dedicated to the study of dark energy and exoplanets. To observe exoplanets, it must be equipped with a powerful coronograph. This addition generated a budget explosion for WFIRST.

We know that the US government has set NASA‘s goal of quickly bringing men back to the moon. To find the money needed for such a project, some people would like to cancel WFIRST. The mission is, however, considered to be of paramount importance to the vast majority of the scientific community.

For two years now, there has been a battle between those who want to save money and those who want to do science. Scientists have just won a victory. WFIRST was again saved by an amendment to NASA’s 2020 budget. The telescope has a development budget of $ 510 million, which is very close to the $ 542 million that the development team was hoping for. This will allow the project to accelerate its development. In fact, it had only received $ 195 million.

However, it will be necessary to wait until the beginning of 2020 to have a final confirmation that the mission will take place. The launch of WFIRST is expected to take place in the mid-2020s. It is expected to join the James Webb Space Telescope at the L2 Lagrange point of the Earth-Sun system.

The future of WFIRST is still uncertain

Like James Webb, WFIRST is experiencing delays and budget overruns. We feared a cancellation in 2018, but for the moment the telescope manages to obtain funding envelopes year after year. This promises a great political battle for the development of the telescope. NASA will have to ask for a budget increase because WFIRST enters a more advanced design phase alongside James Webb, the SLS and lunar ambitions of the US space agency. We can expect very large financial needs.

The White House has asked NASA to study a 2020 budget down 5%, which would mean a billion dollars of budget cuts to be spread over the various programs. NASA has therefore asked the teams working on the telescope to work on ways to reduce the cost of the project, while maintaining the mission.

The coronagraph of the telescope will probably be impacted by this drop in budget, that is to say the instrument that interests us the most for the direct imaging of exoplanets. Cuts in NASA’s budget could also mean a delayed launch. For the moment, the telescope is expected to take off around 2025. Like James Webb, it will be at the L2 Lagrange point.

The WFIRST mission is considered the most important astrophysical mission of the 2020s by the US National Research Council. We can therefore hope that the scientific community will defend the project and its financing.

Although the space sector is booming, NASA still has the same budget difficulties. This time, the Wide Field Infrared Survey Telescope Telescope (WFIRST) is under threat of budget cuts. WFIRST is due to be launched in the middle of the next decade to make infrared observations whose purpose is to provide us with clues about the nature of the famous dark energy. It should also be used for the detection of exoplanets by the gravitational micro-lens method. It is a highly anticipated tool by astronomers and physicists. But an internal NASA study has concluded that WFIRST can not be launched without a budget extension or a downward revision of its capabilities.

NASA has significantly changed the project since the beginning, including the use of a primary mirror that is 2.4 meters wider than the original mirror. This mirror was donated to NASA by the NRO, the organization in charge of reconnaissance satellites. It’s more or less the same mirror as the Hubble space telescope, but with a wider field of view. The addition of a coronograph should also allow the telescope to make direct observations of certain exoplanets. The consequence of the budget reduction would be that WFIRST might not have a coronograph, because it is on this instrument that the report on the project seems the most skeptical.

Coronography is a very promising technique for the discovery and characterization of exoplanets. A coronograph blocks the light of a star, allowing nearby objects such as planets or a protoplanetary disk to be observed directly. With this tool and its infrared viewing capabilities, WFIRST could be the first telescope to identify an Earth-like planet. But the development of this coronograph could endanger the main mission of the telescope, which is the study of dark energy. The report concludes that it is imperative to readjust the project’s ambitions.