All about the Europa Clipper space probe and news 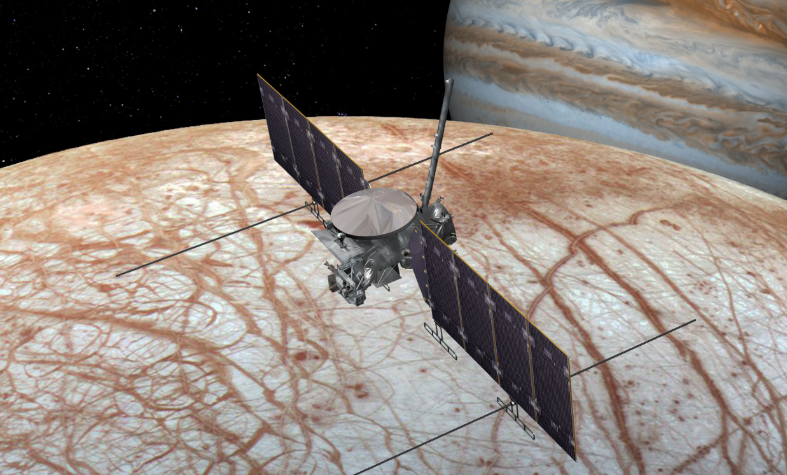 The Europa Clipper mission will not have a lander, but it will be specially equipped to collect a lot of data from Europa, the icy moon of Jupiter. NASA will have to carefully prepare the scientific instruments of the space probe because there will be few opportunities of observation.

Indeed, Europa Clipper will not be in orbit around Europa but around Jupiter. This orbit, however, should allow him to do about forty flights over Europa. The aim of the mission is to confirm the presence of a liquid ocean under the ice surface of Jupiter’s moon, and if possible to characterize it.

To fulfill this mission, Europa Clipper should embark on eight scientific instruments. An infrared camera will film the surface of Europa in search of active sites to understand a little better what is the source of these powerful geysers. Another camera will map Europa with a resolution of 50 meters per pixel. The areas that are particularly interesting may even benefit from a resolution of half a meter. Four spectrometers will have to analyze the chemical composition of the surface and the geysers. These measures should help to estimate the potential of habitability of the underground ocean. A radar will probe the crust of Europa, from ice to the underground ocean. This will include knowing if there are intermediate water pockets. Finally, a magnetic experiment should determine the thickness of the ice sheet, the thickness of the ocean and its salinity.

With all these measures, we’ll probably know if Europa has an ocean. We will also know a lot more about its habitability potential. Let’s hope that one day another mission will land a lander with a submarine capable of exploring the oceans of Europa.

The Europa Clipper mission is threatened

John Culberson, a US congressman who had fought hard for the mission’s budget, has just lost his seat in the midterm elections. We do not know yet if this will have consequences on the Europa Clipper mission. John Culberson said he was optimistic about the mission’s chances of survival.

The Europa Clipper space probe will be almost entirely dedicated to the study of Europa. It would be very difficult to put the space probe into orbit of the little moon of Jupiter. The strategy envisaged is to put Europa Clipper in orbit around Jupiter, which will allow to do a dozen flights over Europa during the mission. The primary objective would be to confirm the presence of an ocean under the ice crust of the Jovian moon, and if possible to characterize it.

The takeoff of the Europa Clipper mission is expected to take place aboard the SLS. But for budgetary reasons, NASA does not rule out using another heavy launcher. SpaceX’s Falcon Heavy could allow the mission to survive in the event of budget cuts.

Which launcher will take the Europa Clipper space probe in the mid-2020s ?

The Europa Clipper space probe will be a payload of the SLS space rocket, which is still in the development phase. Its launch date has not been fixed yet. The SLS has unique capabilities because the high power of the rocket will allow it to send the Europa Clipper space probe to Jupiter in just three years, at a price not communicated but that seems to worry the officials of the mission. An alternative could be to use an Atlas 5 rocket, much less expensive. The space probe would then need six years and three maneuvers of gravitational assistance around the Earth and Venus to reach the jovian system. SpaceX’s heavy launcher, Falcon Heavy, should also be able to embark the Europa Clipper space probe at low cost. But it is not sure that the Falcon Heavy rocket will have the necessary certifications when launching the probe.

Europa Clipper is a very important mission for NASA. The space probe must be in orbit around Jupiter to make a series of overflights of Europa, a moon of Jupiter which is suspected of harboring an ocean under a layer of ice. In three and a half years, the space probe should be able to perform 45 flyovers of the small moon. This should allow it to confirm the presence or absence of the ocean and if possible to obtain some clues about its composition. When we talk about an ocean of liquid water, we immediately think of life. We are therefore very curious to discover what chemical elements Europa Clipper will detect, especially since we can analyze these results together with those of the space probe Jupiter Icy Moon Explorer which will be launched at about the same time.

The Europa Clipper launch is planned between 2022 and 2025. At the end of this period, the SLS should be occupied by the launch of the elements of the lunar space station, called LOP-G. It is therefore not sure that NASA will be able to plan an additional launch for the space probe without changing its schedule for the LOP-G. If another launcher is chosen to embark Europa Clipper, then it may take up to three years between the SLS test flight and the next flight. Europa Clipper was intended to be the first operational payload for NASA’s new rocket. Whatever the solution chosen, the development of the SLS continues.

During a test conducted February 21, 2018, the RS-25 engines that will equip the first stage of the SLS have been operating for 260 seconds at 113% of their rated power. The RS-25 engines are not new, they were originally designed to serve as the main engine for the space shuttle. But by operating at higher power as it was the case last wednesday, they will bring a significant performance gain to the SLS. Let’s hope that the SLS will quickly have payloads, because Europa Clipper could be launched by a private company like SpaceX, and the LOP-G still has no funding.